Purchase this image as a card or print 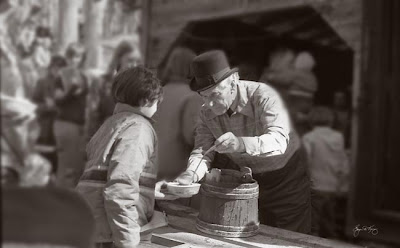 I remember as if it were yesterday, though at least 35 years have passed. Warm spring Sundays, filled with the hope that spring always brings. Sun shining on my face as I left church and greeted Uncle Harry at the door.

Uncle Harry was a deacon in our church and he wasn't my uncle - he was everyone's Uncle. His kindly face, worn with the seasons of a Yankee native's life, would beam as he leaned down to remind me of the sugaring off party at his sugarhouse that afternoon and called me "dear" in that rich North Country accent that resonates still in my brain.
Of course he didn't need to remind me, or anyone else in our informal confederation of communities, drawn together by the necessity of sharing schools, churches, fire departments, police. The moment that sap buckets appeared on the maples along the road we knew that the moment was approaching. Children and adults alike would find their conversations turning to the sap and Uncle Harry's sugaring off party.


Uncle Harry sugared the old fashioned way, though many of the sugaring operation of the day were even then beginning to modernize. His only concession to the modern age came well toward the end of his days when the horse drawn sled gave way to a small blue tractor. Even then, though, he would alight from his tractor, put the rugged yoke around his neck and trudge through the snow from tree to tree gathering sap from the buckets by hand and emptying them into the container on the tractor. When the huge container on the tractor was full it would be transferred to the sugarhouse where his wood fired boiler and evaporator would turn the sweet sap into maple syrup.


-It was the 60's and despite the conservative ways of my North Country neighbors Uncle Harry began to wear his hair long. Not shaggy like so many of my older friends, but longer than the norm for disapproving adults. Uncle Harry's hair was more like a snow-covered rainbow, mostly white with streaks of brown, gold and red as it flowed in waves down his head. It almost seemed that the golden brown of his syrup had so thoroughly penetrated his being that even his hair reflected its glory. Though he never said a word about it to me, I think letting his hair grow was Uncle Harry's way of sending a message to the young people in the community that their choice of self expression did not make them outcasts - despite the whispering and snide remarks of other adults. We loved him for it.


Then the long anticipated day would arrive. After church Uncle Harry would head back to his orchard to prepare for the festivities. A huge pile of clean snow, gathered thoughtfully on some long passed stormy day, lay covered with a large canvas tarp to be unveiled only when the children were gathered around squeeling delightedly.


When families began to arrive Harry Uhlman would be hidden away in his sugarhouse boiling the syrup past pancake thickness to that special level where just the act of pouring it on a snowcovered plate would seem like a spiritual experience. . . nature's sweetest celebration of the spring. While he finished the syrup the children would play in the maple groves, waiting for the moment that they would form a human wave of exhuberance as they rushed to get in line. The adults would mingle, share tales of winter tribulations and plans for the warm days ahead, and pretend that they weren't just as excited as the children. . . .and then Uncle Harry would emerge, wooden bucket in hand, a silly old hat on his head, smiling like an angel . . . I think he was. I know he is now. To this day I can't see a sugarhouse or a tapped maple that doesn't bring him back into my life. 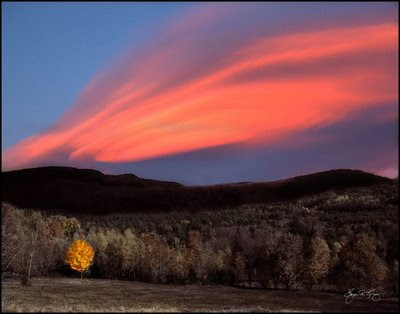 Available as cards or prints here.
This image is available for use in nonprofit fund raising efforts with permission of the artist. More.
Posted by Moosewood Communications at 10:42 AM