The Republic of Indian Stream 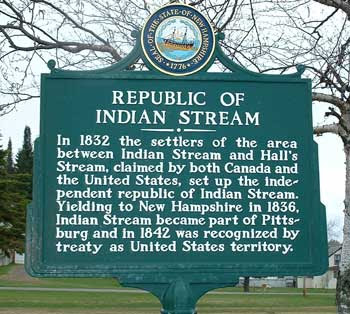 Long before US independence from England the region of New Hampshire now known as Pittsburg was the subject of territorial disputes. First between the British and the French and later between the US and Canada.

The region, known as Indian Stream, encompassed approximately 200,000 acres on the border between New Hampshire and Canada. And its story began long before the formation of a republic during another famous conflict. From 1754 to 1763 Europe and the Colonies were caught up in a conflict between England, under King George II, and France, under King Louis XV. In Europe this period was known in The Seven Years War. In North America it came to be called the French and Indian War. It was a conflict over trade and land.

Prior to the time of this conflict, the region was a well-kept secret of Native people’s and the occasional hunter and trapper. But the conflict brought military parties for both sides into this region, most notably the famous Roger’s Rangers, and word quickly spread both north and south about this extraordinary place with warmer weather, large meadows and fine hunting and fishing. They even found where Native Americans had panned for gold in Annance Gulch. While people were slow to move because of the boundary question, some intrepid souls were willing to trade the security of well establish boundaries for the dream of such a bountiful land and within a few years of the end of the conflict the settlers numbers had swelled to 360 souls. Yet the land dispute continued between the “super powers” even after the powers themselves realigned as a result of the Revolutionary war and the British authorities were replaced by US authorities.

The continuing roots of the problem lay in the difference between the vagaries of geography and nature and the tendency for men to try and simplify their description of the same. In the early days of the US many a deed set the stage for a land dispute, describing a bound by a particular tree, streambed, rock cairn or other object not inclined to remain static to satisfy the needs of mere mortals. The Treaty of Paris, which ended the American War for Independence, was no different. It set the boundary as "the north western most head of the Connecticut River”. However, three tributaries feed into that part of the head of the Connecticut River and almost immediately each government went about setting the boundary based on the tributary that gave it the most land.

For nearly 60 years the dispute continued to fester and cause no end to headaches for the fiercely independent folks of Indian Stream. They had come here to build a life for themselves based on the rich resources of the land and found themselves caught in a geopolitical struggle reaching far beyond their own boundaries and understanding and finally reaching beyond their patience.

On July 9, 1832, they declared the disputed area to be a sovereign nation - the Indian Stream Republic. Settlers drafted a constitution, detailing the rights and obligations of the citizens; instituted their own court system; issued their own stamps and currency; established a militia; and did all they needed to be an independent nation.

Of course, neither the US or Canadian governments were content with this solution and chose to ignore the sovereignty of the Republic and to attempt to enforce their own laws upon the citizens of Indian Stream. Even among the citizens themselves there were factions loyal to one side or the other, despite their independence and, as is common in such geopolitical disputes, each side used the divided loyalties to further their own cause.

As one might imagine, despite their noble efforts, forming your own country is a process fraught with peril. Residents of Indian Stream soon discovered some of the difficulties when scoundrels fleeing the law on either side of the Republic sought refuge within the protective confines of Indian Stream. Indian Stream was not well equipped to deal with law breakers . . . their only jail was a large potash kettle which was placed upside down over the prisoner on a large flat rock. Soon other problems began to present themselves: some citizens refused to pay taxes or even their store bills. Canadian officers continued to served writs in the Territory and the New Hampshire sheriff tried to make arrests.

In 1835 a tit-for-tat series of arrests created the catalytic series of events that led to the demise of Indian Stream. Luther Parker, a former leader of the Indian Stream Republic who headed a group known as “The New Hampshire Boys” with pro New Hampshire sympathies, was arrested by Quebec authorities. Luther owned a store in Indian Stream and was accused of threatening a Canadian citizen with a knife during an argument in the store. Luther was freed when friends swore "he wasn't threatening anyone with that knife, he was just whittling."

Shortly after Luther’s release Quebec Justice of the Peace Alexander Rea held a meeting in a local schoolhouse to attempt to convince residents that they should annex themselves to Canada. The meeting was quickly adjourned when Luther Parker and the New Hampshire Boys showed up to break it up.

A Rainbow of Lillies
Purchase this Image on Cards, Posters, Fine Art

New Hampshire authorities lost no time in arresting John Tyler, a pro Canadian resident of Indian Stream. It is commonly believed that this arrest was in retaliation for Parker’s arrest. However, before the sheriff could get Tyler out of the Republic of Indian Stream, a band of pro-Canadian citizens rescued him.

Canada struck back when Rea, issued an arrest warrant for Richard Blanchard, a resident of Indian Stream who was also a New Hampshire deputy sheriff and NH sympathizer. Rea himself attempted to enforce his warrant with several posses from Canada that streamed across the border and arrested Blanchard. But before Canadian authorities with Blanchard had crossed back with their captive, the Indian Stream people were alerted, gathered a crowd, and chased the posses and rescued Blanchard. Emboldened by their success in rescuing Blanchard the Indian Stream citizens were not content to stop with their rescue but in a heated discussion at the store talked themselves into entering Canada to kidnap Rea, which they did. Their efforts appear to have simply been their way of striking back in the midst of incursions into their own sovereign territory as they only held Rea for a few hours. When they couldn’t agree on what to do with him, they simply let him go.

History is littered with the wreckage of small nations who thought that they could use the disputes of two goliaths to assure their own future only to find that when faced with such a problem even long-time enemies will come together long enough to quash the uprising. The kidnapping of Rea set off alarm bells in both Canada and the US and as a result of a communiqué between Lord Gossford of Canada and Governor Badger of New Hampshire, the NH militia were deployed to occupy the territory, with Gossford’s tacit approval. 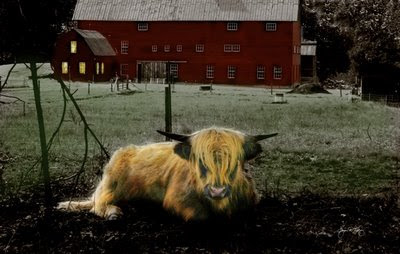 
Posted by Moosewood Communications at 1:49 PM