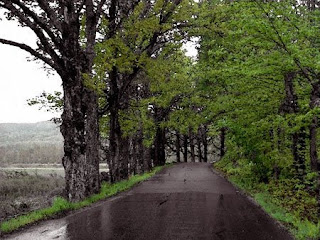 APRONING - A test to check the density of boiling sap. When sap drips off the end of the dipper in sheets, it is "aproning" and is ready to be called syrup. The final test for proper density is done with a glass instrument floated in the syrup - a hydrometer or hydrotherm.

BUDDING - When warmer weather in the late spring causes leaf buds to swell, the syrup takes on a strong molasses flavor. This signals the end of the sugaring season.

DECLINE / DIEBACK - Signs of a lack of vigor in any tree. Causes are numerous and seem to be increasing. Much research is being done on maple decline and its possible link to environmental factors.

GATHERING - The process of collecting and moving the sap from the maple tree to the sugarhouse.

GRADING - The US Department of Agriculture sets standards for maple syrup. Grade A light, medium and dark amber are considered table grades. USDA Grade B is a dark, strong flavored syrup. often used in cooking, though some prefer it for table use as well. All are the same density. Lighter syrup has a more delicate flavor; darker is more "mapley." Medium and dark amber are most widely available. Light amber, used for maple candy and maple cream, is made early in the season; Grade B is made late.

MAPLE CANDY - Made by boiling down maple syrup, stirring it, and pouring it into molds for hardening. Pure maple candy is made from maple syrup only. Blended maple candy contains corn or cane sugars in addition to maple.

MAPLE CROP - An entire season's production. Average in Massachusetts is about 50,000 gallons for the entire state. Most of our sugar houses make between 100-1000 gallons.

REVERSE OSMOSIS - A mechanical means of removing some of the water from the sap before boiling.

SHELF LIFE/STORAGE - Unopened containers of pure maple syrup may be left in a cool dark place for 6-12 months without refrigeration. After opening. syrup should be refrigerated. Freezer storage keeps open or unopened containers indefinitely, and the liquid does not solidify. Any harmless mold that forms on the surface of opened syrup may be skimmed off, and the product may be used after reheating to 190'F. Place reheated syrup in new, airtight containers.

SOFT SUGAR or MAPLE CREAM - A table spread with the consistency of peanut butter. Made by boiling syrup to a slightly lower temperature than that for maple candy, then cooling and stirring.

SUGARBUSH - The maple grove where trees are tapped and sap collected. A sugarbush is measured not by the number of maple trees, but by the number of spouts or taps set. Some old maples drip sap from as many as four spouts. Young trees (at least 40 years old) only have one tap. In either case, each tap yields about 10 gallons of sap over the whole season, which makes about one quart of syrup.

SUGARHOUSE - The rustic building where boiling the sap into syrup takes place.

SUGAR ON SNOW - A sticky, taffy-like treat made by thickening syrup on a stove and immediately pouring it on fresh snow or ice crystals. Eat a pickle between servings!

SUGARING TIME (Season) - Occurs in early spring when days are 35-45 degrees and nights are below freezing. When several of these days occur in succession, sap begins to flow. When nighttime temperatures remain above freezing and days warm into the 50's, the trees begin to bud and the season ends.

SWEET TREES - Not all sugar maple trees are equal. Some have sweeter sap than their neighbors. It takes fewer gallons of this sweet sap to make a gallon of syrup. Efforts to genetically predict (and reproduce) sweet trees have met with some success.

TAPPING - The first step in sugaring, when 7/16" diameter holes are drilled about 3" deep into maple tree trunks. Many old trees have been tapped in this way for 75 or more years.

TUBING/ PIPELINE - Increasingly used in hillside sugarbushes, plastic tubing conveys the sap directly from each tree to holding tanks. Some lines are a mile or more long and may connect 500 or more taps to a single tank. 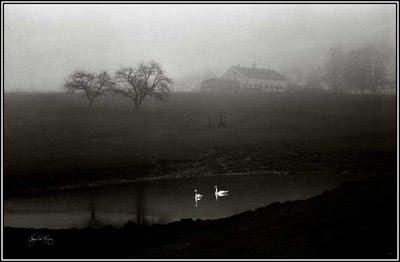 Order this image, Cards or prints.

This image is available for use in nonprofit
fund raising efforts with permission of the artist.
Posted by Moosewood Communications at 11:51 AM