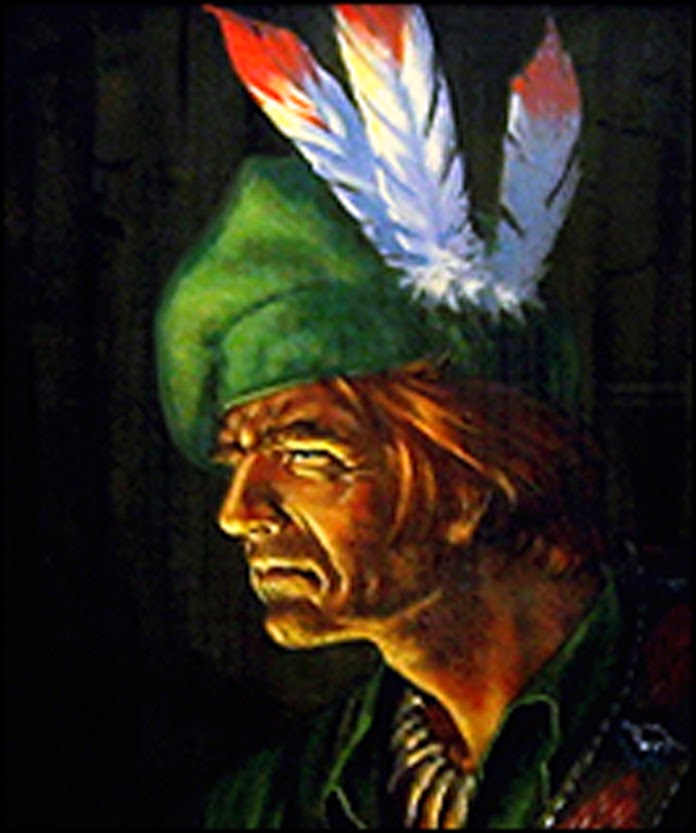 Robert Rogers, or Rodgers (7 November 1731 – 18 May 1795), was a New Hampshire resident and colonial frontiersman. Born in November of 1781 in Methuen, Mass, his family soon moved north to what is now New Hampshire settling in a town Roger's refers to in his writing as Mountalona and today encompassing the towns of Dunbarton and Bow.

His service to the people of New England, particularly in the war known in the colonies as the French & Indian War (in Europe the Seven Years War) is well documented and a study in the fame and controversy that surrounded this remarkable man. Many military historians attribute the seeds of the American Revolution to the ideology, tactics and strategies of the famed Roger's Rangers, started under his leadership. Indeed, one of his favored rangers was John Stark who would later set aside his "Ranger temperament" to become a General in the Colonial Army and utter the famed phrase "Live Free or Die".

Legend has it - though no documented evidence exists - that, after a brief stint in England where he was feted as a British hero of the frontier, Rogers returned to America and offered his services to George Washington who turned him down for fear that he was a loyalist spy. Rogers in spite joined the British and fought as a loyalist.

We will, likely, never know if Washington was right about Rogers and the legend may, in fact, be nothing more than revisionist history fostered by the likes of the peripatetic historian Francis Parkman  who  nearly one hundred years after Rogers day, set his sights on rehabilitating Rogers in the eyes of a public that remembered only his final betrayal in his service to the army of King George.

Yet, the legend of Washington's actions - true or not - and certainly the work of Parkman, may contain the seeds of Roger's historic rehabilitation. After all, today Rogers is revered as the father of the Rangers and the Green Berets, while his fellow loyalist Benedict Arnold's name has become synonymous with treachery and betrayal.

Lest we fall into the Parkman trap of romanticizing the frontiersman, it should be pointed out that Native American’s of the time – with the exception of a few sub-groupings of Algonquin and Iroquois who sometimes fought beside him or served as scouts – referred to him as Wobomagonda, translated to “White Devil” because Rogers and his Rangers could be every bit as treacherous and vicious as any of their rivals - Native or European.

The truth about Rogers probably lays somewhere in between. The Rangers may have been pitted by history against the native indigenous people – but they drew much of their strategies, dress and temperament from the very same people and many historic documents evidence their admiration of their foes.

After the Revolution Rogers returned to England where he died unappreciated and impoverished in London - far from his family and the woods and mountains of his native New England that he loved so much.


Links
Roberts Rules for Ranging
Posted by Moosewood Communications at 8:21 AM