Legends and Lore of the Saco River

Legends and Lore of the Saco River
By Theresa Ludwick

Time is like a river: always passing, never still. So, in a way, stepping into a river can 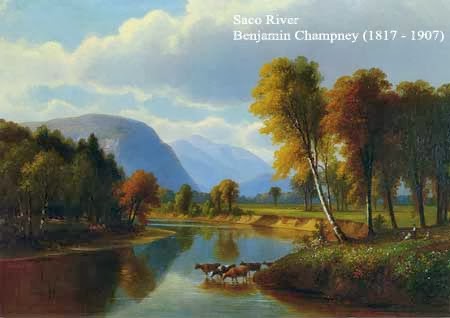 be like stepping into time. Now, with this line of thinking, imagine if one could reverse the course of a river. Would it not equate to the turning back of time? Humor this author if you will, and let us do just that, and not just with any river, but with the mighty Saco River of New Hampshire and (grudgingly) Maine.

Born in northeastern New Hampshire, the Saco River is the child of Saco Lake in the White Mountains’ Crawford Notch. Several major tributaries (including the swift and cold) Swift and Cold Rivers, contribute to the growth of this wild child as it runs south-southwest for 134 miles, through the towns of Bartlett and Conway, New Hampshire. The Saco River then leaves the granite state for York County, Maine, where it passes between the towns of Saco and Biddeford on its way to its ultimate destiny, the Atlantic Ocean.

See the river flowing upstream now, several hundred years to another birthplace: that of legends, for the surging life-force of a river such as the Saco cannot help but give rise to such things. The following legend is just one of many stories of Gluscabe, whom New England’s Abenakis considered the creator of all things.

Gluscabe and the Mighty Magicians

Gluscabe had been the friend, when he was young, of a family of powerful magical giants. As the years passed, rumors abounded that this family of giants was evil, killing and eating people indiscriminately. Now Gluscabe, who was himself a magician, set out to find the truth. Disguising himself, he went among the family of giants found along the Saco River between Mt. Kearsarge and Cathedral Rocks, near today’s “Dianna’s Bath.”

Suspicious of him, the family tested Gluscabe severely, aiming to destroy him. Yet with each attempt, Gluscabe overpowered them, until finally, he stamped his feet on the sandy shore of the Saco River and water came gushing down from the mountains, carrying the family downstream. Gluscabe sang a magic song and the evil magician/giants became fish and were washed away to sea. As the legend goes, these bad guys were wearing wampum collars that “may still be seen today.”

In my research, I discovered that the Collared (sometimes called the Necklaced) Carpet Shark is indigenous to Atlantic waters. Hmm…

Research on this next legend turned up various versions of what prompted a New England Native American chief to put a curse on the Saco River. In one version, his daughter was kidnapped by white men. In another, he had been friends with the white men who caused his infant son’s death. In still another, the deed was done by sailors, who killed both his wife and his son. Perhaps it doesn’t really matter which version is embraced, as death occurred in every case.

Chief Squando was a family man until the fateful day he lost his family – namely, his wife and son. It is said that the family lived along the Saco River, near Saco Island in Maine. The wife of Chief Squando was paddling along the river with her infant son one day, when several feisty sailors came exploring up the river. Spying Squando’s wife canoeing with her child, the sailors began to torment her. Wondering if it was true that Native American children were natural swimmers from birth, they snatched the baby from his mother’s arms and tossed him into the river.

Needless to say, the child sank. Diving in after her son, Squando’s wife also perished. Grief-stricken, Squando turned against the white men that day with a curse. From then on, he claimed, the Saco River would take the lives of three white men every year.

It is said that this story did not begin to surface until about 100 years or so after the supposed incident. Some think it the wild conjecture of a publicity seeker. It is true, however, that in both New Hampshire and Maine, while on its long, meandering journey to the sea, the Saco River claims lives every year.

Though not a legend than a ghost story, this last story is repeated because of its association with the Saco River and Saco Bay in Maine.

One night, in the early 1890s on Wood Island, where the Saco River empties into Saco Bay, a drunken young squatter who lived on the island returned from a night of carousal on the mainland. In his stupor, he was carelessly wielding his rifle. Confronted by another Wood Island resident, a lobsterman and part-time special policeman, the drunkard shot and killed him.

Afterward, the young man staggered to the island lighthouse, where the keeper advised him to turn himself in. Now distraught, the killer went back to his shack on the western part of the island and did himself in. People insist that the ghost of the murdered lobsterman is still on the island, and is responsible for many strange happenings that have occurred there over the years. It is thought by some that he is looking for the rotter that took his life near the water, not knowing he’s a goner. He really oughter - be informed, that is.

Ed's note: Provided by Heart of New Hampshire magazine and published here to assure that the work not be lost.
Posted by Moosewood Communications at 8:51 AM