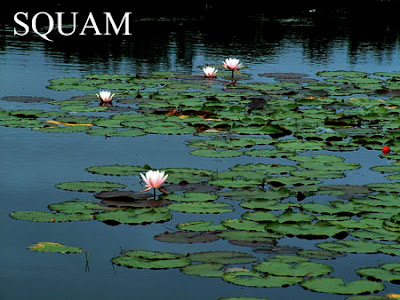 By The Reverend Sidney Lovett
The Squam Lakes provide a sensual experience which leads toward voluntary participation in maintaining no less than the dignity of life. The visual beauty of the hills from the lakeside and the gem-like quality of the lake as seen from the hilltops is best described by the poet, John Greenleaf Whittier:

“Before me, stretched for glistening miles,

Upon its bosom swam.”

So precious is this view of a century ago that the majority of shore land dwellings are deliberately concealed within the woods. And a pair of nesting eagles crown a remote island in an equally crafted nest.

The sounds of Squam are numerous, but the eerie calls of the loons infiltrate every part of the watershed. Over 50 loons take up residence here from May to October. Their conversations together with the roll of thunder bouncing from hill to hill are inimitable to our ears.

More subtle are the awakened senses of taste and smell. The small mouth bass, the lake trout and the landlocked salmon are highly sought after. Alas, air pollutants from afar have reduced the amount for safe eating. As for the receptors of the nose, there are ever present options of chimney wood smoke and the scent of the abundant pine trees. The occasional defensive boundary of the skunk will penetrate even the stuffiest nose.

The fifth sense is that of touch, and the tactile joy is discovered by immersion in clear water and feeling the sandy bottom created twenty thousand years ago by the retreating glaciers.

These notable sensory experiences have, over the years, developed some uncommon habits of research and generosity. For example, the depth measurements of the lake, courtesy of Brad Washburn and the Boston Museum of Science, make Squam topography and the subsequent measuring for water quality simply beyond compare. The Squam Lakes Association, now in its 101st year, acquired years ago two islands totaling 60 acres for public low-impact use. The Association maintains over 40 miles of trails, attacks the invasive weed, milfoil, and sponsors countless programs for all ages. Add to this the Squam Lakes Natural Science Center with its year round educational opportunities for thousands of school children of our state. The trails, exhibits of wild life from bears to birds encourages a wide appreciation of our surroundings.

With an eye to preserving the watershed from inappropriate development, the Squam Lakes Conservation Society has effectively encouraged and supervised land easements to preserve the wilderness quality of the watershed. These living “hands-on” associations are underwritten by the generosity of many people in times past and the present. The best history of the lake, the land and the people is contained in the recent book, “Squam,” by Rachael Carley.

As a result of the sensory stimuli and the prolific voluntary stewardship, there is a symbolic crown which sums up the Squam experience. It is Chocorua Island, set aside solely for the public worship of the Creator of life in whom sensuality, stewardship and the spirit are combined. The generations have come to this pristine island sanctuary for over 100 years to experience, in Whittier’s words, “the silence of eternity interpreted by love.”

The Reverend Sidney Lovett is a well known figure along the paths and shores of Squam Lake and in the hallowed halls of the NH Legislature.

A Favorite Spot on Squam

Posted by Moosewood Communications at 12:41 PM