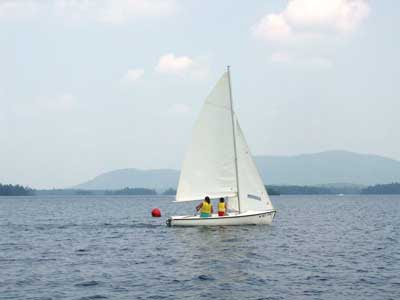 For many people, when you mention “The Lakes Region,” an image of Lake Winnipesaukee with its hustle and bustle comes immediately to mind. But there are several other lakes in the Lakes Region which have their own unique characteristics and offer a quieter charm. Squam Lake, located primarily in Holderness, is one of them, and it is counted among my favorite places in the heart of New Hampshire.

Squam Lake is big enough to accommodate a variety of boats, from kayaks and canoes to motor boats and pontoons, but small enough to enable the boaters to hear and appreciate the lonely cry of the loon. With a daytime speed limit of 40 mph (20 mph at night), boat enthusiasts can cruise and enjoy the lake at a fairly leisurely pace, without intimidating or intruding on smaller crafts. There is a sense of sharing and camaraderie on the lake as opposed to the sense of competition which is often evident on some of the larger lakes in the region.

With a long-standing reputation of being a pristine lake in a beautiful unspoiled setting, ringed by a variety of mountain ranges and hills, Squam has long attracted loyal visitors year after year. It is this reputation that reportedly attracted Hollywood producers in 1981 when they chose Squam as the setting for the classic award-winning movie, “On Golden Pond.”

Squam Lake is actually two lakes, Big Squam and Little Squam. Little Squam, measuring about 408 acres and offering just over four miles of shoreline, lies between the towns of Ashland and Holderness. The average depth of Little Squam is twenty-three feet, with the deepest point measured at about eighty-four feet in depth. The Ashland Town Beach, along with a fine example of a New England covered bridge, are located at Little Squam. A narrow channel leads under U.S. Route 3 in Holderness to Big Squam, which measures 6,765 acres and has just over sixty miles of shoreline. The average depth of Big Squam is thirty-six feet, with the deepest spot about 98 feet deep.

According to Chris Devine, Executive Director of the Squam Lakes Association, 45% of Squam Lake is located in Holderness. The lake also touches the towns of Ashland, Center Harbor, Sandwich, and Moultonboro. There are thirty-five islands on Squam, twenty of which are inhabited to some extent, according to Devine. The Squam Lakes Association owns two of the larger islands, Moon Island and Bowman Island, and low-impact camping (by reservation) is allowed. Weddings and non-denominational religious services and are held during the summer months on Church Island, which is managed by the Chocorua Chapel Association. With twenty coves and three bays distributed around the lake, Squam never seems crowded, even on a busy summer’s day.

The Squam Lakes Association was formed in 1904, with its stated mission being to “protect the Squam Lakes watershed through conservation, education, and outreach programs.” Together with private landowners and area conservation groups, the SLA has endeavored to keep Squam from becoming over-developed and to prevent the lake from losing its unique charm and quiet atmosphere. Devine attributes the special ambience of Squam to the ethics and attitudes that people in the area have demonstrated towards the lake.

“There is a great commitment and attention towards conservation efforts in this area,” Devine notes. “Much of the land around Squam has been owned by many generations of the same families, and people seem to want to conserve the integrity of the shoreline. This gives Squam the appearance of not being over-developed.” Devine further explains that the quieter nature of Squam as compared to Lake Winnipesaukee is due in part to historical transportation issues, as the railroad lines for the Squam area ended at Ashland, making Squam less accessible to travelers and thus slower to develop than other lake destinations.

Public boat access to Squam is available at the public ramp located on Route 113 in Holderness (just across from the Squam Lakes Science Center) and at the headquarters of the Squam Lakes Association on Route 3. The ramp on Route 113 was donated to the State of New Hampshire by the SLA, and the land for parking was donated by the Science Center. Parking is free. Access at SLA headquarters is limited to only low-impact boats such as kayaks, canoes, sailboats, and boats with motors of 25 horsepower or less. Holderness residents, campers, boat renters, and SLA members can park for free, and other boaters can park for the day for $5.00.

If you don’t have access to a boat or just want to take a leisurely guided tour, various options are available. Guided tours are offered by the Squam Lakes Science Center. Recently renamed “Explore Squam,” the tours leave daily from the docks located next to Walter’s Basin restaurant (named for the elusive fish in the Golden Pond movie), and vary from 11⁄2 hour scenic tours similar to the Squam Lake Tours to longer educational tours led by a Science Center naturalist.

With any luck, you will get to see the loons and hear for yourself their haunting cries and eerie laughter. For some reason, loons always seem to know when I want to take their picture. As soon as I pick up the camera, they dive underwater, only to re-appear a few minutes later in a totally different spot usually several hundred feet away. They are incredible underwater swimmers.

According to a recent loon census conducted by volunteers with the Loon Preservation Committee and the Audubon Society, more than seventeen pairs of territorial loons, ten non-territorial adult loons, and one immature loon (two years old) were located on Squam Lake. Seven of the pairs nested, producing eight loon chicks. Nesting areas are posted with signs warning people to keep their distance in order to give the chicks a chance to survive. Loons are estimated to live between 25 and 30 years; the Common Loon in its present form has been on earth for over 22 million years.

The loons and cormorants, along with an occasional heron, compete with fishermen for the wide variety of fish in the lake, including salmon, perch, cusk, sunfish, pickerel, rainbow trout, lake trout, and bass. Annual fishing licenses may be purchased by residents and non-residents at many nearby stores and marinas, or online. Non-residents can also buy temporary licenses for one day, three days, or seven days.

Several mountain ranges surround Squam Lake, including the Squam Range with East and West Rattlesnake, Mt. Percival and Mt. Morgan in Holderness and Sandwich to the north and west, and Red Hill to the east in Moultonborough. On a clear day you can also see Plymouth Mountain in Plymouth to the west and Mount Chocorua near Conway several miles to the northeast. Rattlesnake Mountain is a popular and easy hike offering great views of the Squam Lakes. At the base of Rattlesnake Mountain, you can find Rockywold-Deephaven Camps, a family camp located on Squam Lake since 1897. During the winter, ice is harvested from the lake in an annual tradition to provide refrigeration for the old-fashioned ice boxes in the cabins.

There is something special about Squam – its peaceful ambience, natural beauty, water quality, variety of wildlife, and traditions – all of which provide visitors and residents alike an enjoyable feeling of escape from the hustle and bustle of modern life.

Reprinted with permission from HeartofNH.com

A Favorite Spot on Squam

Posted by Moosewood Communications at 12:58 PM