Archived from Heart of NH Magazine 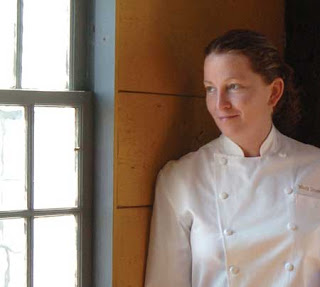 
“I was really nervous. I had to do a lot of things, other than cook. I had to act, for example, and that’s not what I do!” explained Mary Dumont, executive chef at the Dunaway Restaurant in Portsmouth, when describing her experience as an “Iron Chef America” challenger during a late October taping in New York City. It was the latest in a string of national media appearances for the award-winning chef, who was also recognized as one of the 10 best new chefs in the United States – and the first from New Hampshire – in 2006 by Food & Wine Magazine.

“It was a true hour and really intense. Cameramen were everywhere, and there were lots of cords to jump over,” she continued. “You have to be very organized, very focused.” When first approached about this opportunity, the energetic chef had to take time to think about it and the implications that appearing on this popular national show would have on her career, especially the time spent away from the restaurant. In the end, though, she was glad she accepted the challenge. The show will air sometime early in 2007.

It wasn’t easy, Dumont admitted, to focus at first. She and Iron Chef Cat Cora had barely half an hour to familiarize themselves with the set and equipment before taping began. “I wasn’t aware of the time,” she said. “I heard everything they [Food Network’s Alton Brown and Kevin Brauch] were saying, everything! I tried to tune it out and concentrate.”

Her sous-chef, Ben Hasty, and her brother, Dan Dumont, also a professional chef, were in the kitchen to help her. She said that she didn’t use recipes or a cheat sheet – “There’s no time to consult anything like that!” – and that she organized the tasting menu in her head. As time went by, she was able to tune everything out and remain calm. She also kept checking to make sure her team was on the mark.

She was under a non-disclosure clause and couldn’t reveal who won, but she expressed real respect and admiration for Cat Cora, one of the top female professional chefs in the country. She also couldn’t reveal the secret ingredient or details of the dishes she prepared, but she could say that she made a flan, fresh gnocchi and braised veal. (Each chef has to make five dishes using a secret ingredient, revealed at the beginning of the show.) The judges were Dana Cowin, editor-in-chief of Food & Wine, and actors Ted Allen and Julie White.

“At the end, the judges came over and said, ‘Wow, you guys were great, such a well-oiled machine!’ And that’s how it felt – oddly calm – which is a sign of a good kitchen,” said Dumont. “I felt great, when it was all over. I held my head high and felt proud of my team and what we did.”

She’s also very proud of being named one of the best new chefs in the country, an honor she’s worked for her entire life. “I’d wanted this my entire life, and when it came, I was overwhelmed with emotion, laughing and crying,” she explained about the official call that came from Cowin. “But be careful what you wish for!” And she laughs, which comes easily to her. “I wake up and go to bed the same, but everything else has changed! But I keep my feet on the ground.”


In fact, that’s how she summed up her life since moving home in 2005 to helm the new restaurant at Strawberry Banke. “All this is great, but I cook.” She’s happy to be back in New Hampshire, among family and friends, after nine years spent honing her craft, mostly in California.

“The first and last ingredient I put into all my food is love. It sounds corny, but it isn’t. I use ingredients that are evocative of a feeling,” Dumont said. “I express to my cooks all the time, take your time, think about what’s on the palate, ask yourselves if this is seasoned correctly.” Dumont’s cuisine at the Dunaway is American Contemporary, with French influences. The signature dishes that propelled her to prominence include Billi Bi saffron mussel soup with fried mussel, fennel and potato confit; pan-seared halibut, with slow-cooked heirloom tomatoes, Heron Pond Farms super-sweet onions, almonds, caperberry vinaigrette & Olio Verde Extra Virgin Olive Oil; and duo of Wolfe’s Neck Farm Beef/braised roulade of short rib and grilled bavette with creamed spinach and fennel with Yukon gold potato sauce.

One of the keys to her menu is the farm-to-table connection, which insures fresh, usually local ingredients. She sources a lot locally – game and beef from Maine, pheasant from Vermont – and relies, especially in the winter, on contacts she made in California. Her wild mushrooms, for example, come from a trusted purveyor there. She said that importing from California isn’t necessarily more expensive than sourcing locally.

So what can diners look forward to this winter, her second at the Dunaway? “Lots of game, from Northern Maine, and beef, again from Maine. Heartier produce and preparations with what’s in season.”

These preparations will probably include some of her favorite ingredients: Basque ingredients, tomatoes, fennel and saffron. “Fennel is one of my favorites because it has lots of flexibility and dimension. I absolutely love saffron!

“When people leave my restaurant, I want them to feel that they’ve been fed on multiple levels, and that they’ve had a great experience,” she said. “Everything on the plate has to come together as a story.”

As everything has come together for Dumont. She worked in California (and, briefly, Chicago) for nine years because she wanted a strong professional foundation. That established, she is home and happy. “Portsmouth is a great small city. The biggest thing I feel about this area is the enormous support. I really appreciate it. I came home to love and friends. Now I have success, and people are happy for me.”
Posted by Moosewood Communications at 4:27 PM