From the Heart of NH Archives 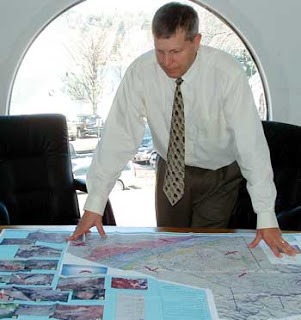 Take a dollop of scarce resource, a pinch of satellite magic, a dash of electro-magnetics; add in a lot of hard science; mix it in a multi-stepped process; add a touch of excellence and what do you get? A formula for success that has made Emery & Garrett Groundwater, Inc. the most sought after Groundwater exploration and development experts in the Eastern US,

The founder of the firm and head “chef” is James “Jamie” Emery, President of EGGI: husband, dad, AAU basketball coach, Sunday school teacher and scientist. Emery, a transplant from the less serene shores of Long Island, NY, settled in New Hampshire after a journey that brought him along an abandoned track at Wheaton College’s Seminary program (where Billy Graham cut his religious teeth), to the University of New Hampshire’s renowned engineering and earth sciences program. Where he came to study “the branch of science most antithetical to my religious education”.

Emery. though, is less a rebel than an iconoclast. He cuts his own path through life and somehow manages to do it in a way that unites those around him in a powerful way. Emery graduated from UNH in 1980 and moved immediately to the Meredith area to work for a company called BCI (Biospheric Consultants International) Geonetics where he became a senior VP by the age of 27. At an age when most of us were still figuring out how to act like adults he was participating in a groundwater exploration program for the new city of Mogadishu, Somalia and doing geological surveying to develop a series of wells for the nomadic cattle farmers of South Africa in the midst of the African National Congress’ insurrection. To give you a more historic perspective here: Nelson Mandella was still in prison and South Africa was in a state of emergency.

But by 1989 James Emery was ready to go his own way and with a small contingent of colleagues including Peter Garrett, Ken Hardcastle, Janine Jansen, Dan Tinkham and a few newcomers including John Brooks, they formed EGGI with a small amount of capital from an investor and a dream. In the ensuing 17 years, they have completed more than one thousand groundwater development projects providing over 150 million gallons a day of freshwater. They have developed groundwater sources for such notable entities as the Walt Disney Corporation, General Electric, Siemens Power Corp., American Securities Council, Howard Hughes Institute, the PGA, Centex, IBM, Xerox and recently the CIA (we’d tell you where, but then we’d have to kill you). In addition to the 45% of their business that is commercial, they do about 55% of their work with municipalities and large water utilities such as the City of Atlanta, Cobb County-Marietta Georgia Water Authority; Loudoun County, Virginia Sanitation Authority, Portland, Maine; and Harrisonburg, Virginia. They have also worked for many States and Federal Agencies, including the U.S. Department of Defense, EPA, and the U.S. Department of the Interior. In NH they have conducted groundwater investigations for cities of Keene, Rochester, Raymond, Ashland, Durham, Merrimack, Penacook and Concord to name only a few. Recently the city of Portsmouth has retained them. Last year alone they installed and permitted over 150 new commercial and municipal wells.

The fact that all of those who began this adventure together are still together after 17 years is testimony to the fact that EGGI is more akin to a family than a business. And for that reason, they have purposefully maintained the size of the business at a comfortable core of fewer than 40 people and annually take a three-day retreat vacation together, with the entire family in tow.

Janine Jansen, who has been Jamie’s executive administrative assistant since EGGI’s inception says, “Being employed at EGGI is the highlight of my working career. Helping create such a successful business is very rewarding … and challenging. We have an absolutely fantastic group of people working here … there is genuine respect and camaraderie between all employees.”

Most intriguing of all is a business model that, while pragmatic from a scientific point of view, is unlikely to be found in any course descriptions in the ivy-covered halls of academia - though it probably should be. It’s hard to quarrel with success like this.
Posted by Moosewood Communications at 3:18 PM