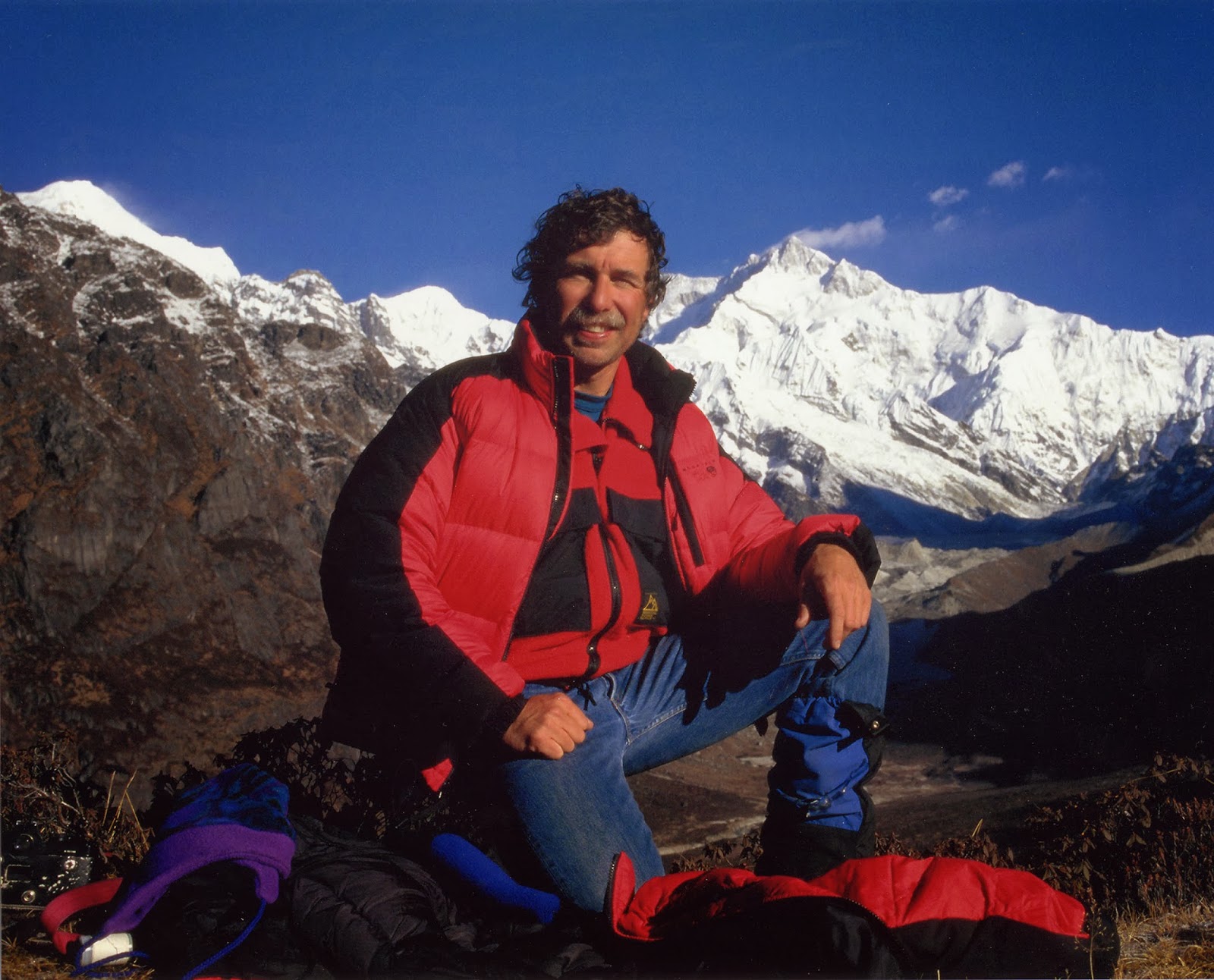 Expedition guiding. Running a retail store and climbing school. Producing and selling photographic art. Speaking at a variety of colleges. Rick Wilcox, of Eaton, NH manages these diverse career pursuits and more, to live doing what he loves on an everyday basis.

"You have to be very aggressive, very passionate," Wilcox says. "Life is all about the pursuit of happiness; I feel bad for those who get into ‘living-for-the-weekend professions,’ as so many people have."

Wilcox is co-owner of both International Mountain Equipment, located in North Conway, and International Mountain Climbing School, which is run from the store’s second floor and features over twenty guides and countless clinics, courses, and events. He himself has led 48 expeditions to peaks over 18,000 feet.

Originally from Massachusetts, his high-altitude aspirations originated while rock climbing around Boston’s North Shore during high school. In 1964, at age sixteen, he joined the Appalachian Mountain Club, which proved to be a lifelong involvement.

"Climbing schools then were not like today," Wilcox recalls. "It was volunteer-only instruction. The instructors weren’t professionals, just more experienced people."

In 1966, Wilcox attended UMass Amherst, where he met a group of fellow AMC members with whom he regularly rock climbed on weekends. He began ice climbing in the winter and made his first expedition  - to Alaska - in his senior year.

"I had a great time, it was money well-spent," Wilcox laughs, recalling paying for the trip with a college loan. "I gained a lot of experience, and it got me a job at Eastern Mountain Sports."

The Amherst retail store, where Wilcox worked upon graduation, was the third opened by EMS. When the company’s fourth store and first climbing school settled in North Conway in 1971, Wilcox followed. When larger stores opened in bigger cities, he refused to transfer - citing summer trips with his parents to the Mount Washington Valley as origin to seeing the area as his "base camp."

In 1979, Wilcox bought IME from founders Paul Ross, Billy Aughton and Frank Simon, and switched to guiding more and retail-managing less. Starting with local rock climbing and moving west to national parks such as Grand Teton, Wyoming and Yosemite, California, IMCS began offering what EMS didn’t . . . organized trips. The climbing school’s international travels first went to Central and South America, then moved into Alaska and broadened through Europe and Asia.

IMCS’s newest trips include Mount Kilimanjaro and African safaris. The school’s leaders travel to most continents, but do not make trips to Australia or Antarctica (although they will make arrangements with other groups if clients desire such trips). Wilcox still sees an expedition to Mount Everest in the mid-1980's as his "best career move."

"If I didn’t lead that expedition, it wouldn’t have happened," Wilcox says. "I thought I’d fall into a team of Westerners, but it didn’t  happen that way."

In his mid-thirties at the time, Wilcox realized, "I’ve got to get going and make it happen, it can’t wait," and put together a team of eight men for the 1991 American New England Everest Expedition.

"Nobody east of the Mississippi had ever climbed Everest. We were able to able to do it for $17,000 per person back then. It was a no-frills expedition; we didn’t have a lot of Sherpas, etc.," he remembers.

In his fifth Himalayan expedition, Wilcox reached the summit of Everest. Fellow teammates Mark Richey and Barry Rugo, both of Boston, were also victorious, as was Yves LaForest, the first climber from Quebec to do so. With half the team at the summit and no injuries or frostbite, Wilcox deems the trip "whoppingly successful."

"It was a huge physical and mental challenge and took six years to organize," he says. "It was the highlight of my climbing career and opened more doors. Being an Everest summit-er makes you kind of a celebrity in the climbing world. People listen more."

Wilcox explains Everest as a standard similar to winning a gold medal in the Olympics, although clarifies that while very rewarding, the mountain was not his most challenging. The south face of Cho Oyo, located next to Mt. Everest, is the sixth highest peak in the world at 27,000 feet, and has only been completed three times.

Wilcox says "the mountains have  been good to me," and that he "hasn’t been in any debacles with people dying" on any expedition. He credits this to being conservative and cautious.

"I certainly haven’t been to every mountain top I’ve tried to climb, but I’ve always gotten everyone back alive," he says. "In mountaineering, the summit is always optional; if you die, it doesn’t count."

This also leads him to criticize guiding tactics used in the infamous 1996 Mount Everest disaster, the deadliest season in the mountain’s history, saying, "From my perspective, the ‘96 mistakes made were in guiding and stemmed from money, egos, etc. You don’t go to the summit after 11 A.M., which they did over and over. Clients were paying huge amounts of money and attempts were made to get them to the top at all costs, including death."

The books "Into Thin Air" by Jon Krakauer and "The Climb: Tragic  Ambitions on Everest" by Anatoli Boukreev are the basis for some of Wilcox’s college lectures. At the University of Maine at Orono, he visits English students after they have read both books, which present opposing views of the ‘96 disasters. He asks students to decipher who are “the good guys and the bad guys"  in the recounts. At other colleges, he gives entertaining motivational speeches based on climbing.

Although never having faced fatal accidents on his own journeys, Wilcox is involved with the Mountain Rescue Service, an organization formed to help New Hampshire Fish & Game and the U.S. Fire Service fifty years ago.

"If those two organizations have a situation they can’t handle (involving technical or tricky terrain  and climbing on the Presidential Mountain Range), they call us. We’ve done 500 or 600 rescues in places like Mount Washington, Cannon Cliff, and Cathedral Ledge, and saved a lot of people."

At 58, Wilcox "still feels good in the mountains," but says he is getting toward the end of his guiding career, and for the last twenty years or so has been concentrating on getting people ready for big mountain climbing (over 18,000 feet). Courses at IMCS address all aspects of big mountain climbing, except high altitude acclimatization. Winter mountaineering, self-rescue, aid climbing, and crevasse rescue are just a sample of what Wilcox, together with co-owners Brad White and Maury McKinney, offer through the school.

"We take a lot of pride in what we do; that’s how we’ve survived as long as we have." Wilcox says. "It’s a lifestyle for us – we’ve had our ups and downs over the last 27 years, but we’re one of the few businesses in North Conway that haven’t changed  ownership in that time."

His thoughts on the business and guiding, and his quest to combine them with an outdoor lifestyle from his "White Mountains base camp" are appropriately summed up in a climbing analogy:

"Mountaineering is all about the harder the struggle, the greater the reward. It’s not always fun doing it, but when you get to the summit, it gives you a sense of accomplishment that’s hard to explain unless you’ve done it. Easy equals no great reward; the most difficult equals the greatest reward." 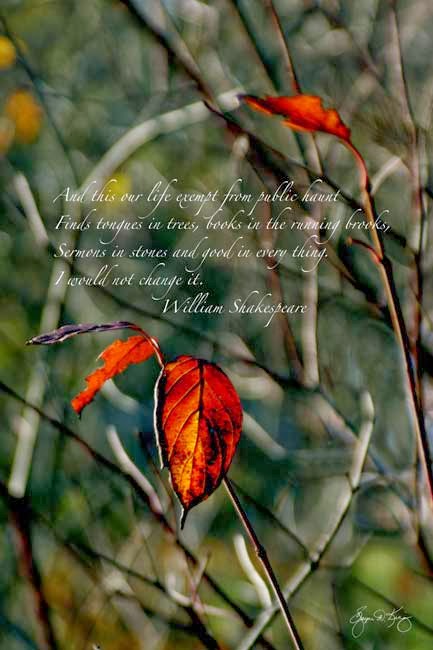 "And this, our life, exempt from public haunt, finds tongues in trees, books in the running brooks, sermons in stones, and good in everything. I would not change it."
Other NH Cards, Posters and Prints

Posted by Moosewood Communications at 8:32 AM