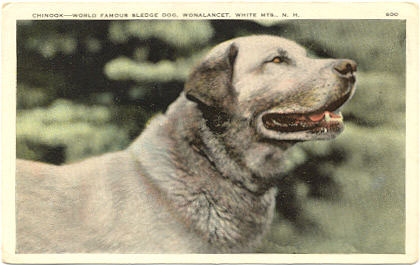 The relationship between humans and dogs likely goes back to a time before we could even communicate with one another. It is, without doubt, the stuff of legend and lore.

New Hampshire can claim a special part in that long trail of legend and lore because of one very special dog and the man who loved, raised and trained him; and turned his remarkable traits into a unique breed of working dog.


Disney himself could not have created a more powerful story of love between a man and a dog and the achievements spawned by that affection.

According to Architectural Historian Jim Garvin of the NH Bureau of Historic Resources, “Arthur T. Walden had worked as a teamster during the Klondike gold rush, beginning in 1897.  After his arrival in New Hampshire in 1902, Walden began to raise sled dogs at Wonalancet Village in Tamworth.

Born January 17, 1917 Chinook was tawny with a black mask and descended from mixed parentage. His father was a large tawny, Mastiff/St. Bernard-type dog his mother a Greenland Husky. Until the time of Chinook most dogsleds had been made up of Huskies and Malamutes. Chinook would begin not only a line of dogs that would bear his name but also a trend toward the development of mixed breed lines, especially bred as sled dogs.

According to Jim Garvin, Chinook was a descendant of Admiral Robert Peary's lead dog in Peary's North Pole expedition of 1909.

Chinook had intelligence, power, endurance, speed all things that Walden was looking for in a sled dog. Yet is was not only his prowess before the sled that won the hearts and minds of the public it was also a disposition that was legendary. Chinook was, without doubt, one of history’s greatest lead dogs, but unlike many of the working dogs of his time, he was gentle and friendly. Chinook loved children and the brief piece here – taken from a 1928 yearbook for Camp Mowglis – is a testament to his disposition as well was the mark he would make on history.


Together Walden and Chinook carved their way into the history books. With Chinook in lead, Walden and his dog sled team were the first to successfully climb Mount Washington.

In 1928 Admiral Byrd appointed Arthur Walden lead driver and dog trainer for his 1929 Antarctic Expedition. Walden may have seen the event as the culmination of his career for at the time he was already 58 years old, by far the oldest (human) member of the expedition and perhaps the one member with the most difficult job – carrying rations to sustain the rest of the team.

Byrd wrote of Walden and his team:

"Had it not been for the dogs, our attempts to conquer the Antarctic . . . must have ended in failure. On January 17th, Walden's single team of thirteen dogs moves 3,500 pounds of supplies from ship to base, a distance of 16 miles each trip, in two journeys. Walden's team was the backbone of our transport. Seeing him rush his heavy loads along the trail, outstripping the younger men, it was difficult to believe that he was an old man. . . . but he had the determination and strength of youth.)”. 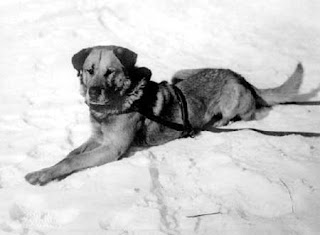 Chinook himself was no spring chicken. At 11 years – he was the equivalent of an 80 year old – so to Chinook went the real honor of the eldest member of the expedition party.

Again we quote Byrd: “He (Chinook) was old when brought to the Antarctic, too old for hard, continuous labor, and Walden used him as a kind of "shock troop", throwing him into a team when the going turned very hard. Then the gallant heart of the old dog would rise above the years and pull with the glorious strength of a three-year-old.”

Walden, Chinook, and Byrd of course, were the modern day equivalent of rock stars. Newspapers and radio stations the world over followed the news of their adventure. So it was with great sadness that the news spread around the world that on Chinook's twelfth birthday, he wandered away and was never found. Walden had lost his best friend. But their story would pass down through the ages.

Today Walden is credited with bringing the sport of sled dog racing to the New Hampshire area; founding the New England Sled Dog Club in 1924, which is still in existence today. Walden's teams dominated this sled dog racing circuit for many years.

As for Chinook, his lineage carries on in the breed that now bears his name. His loss was mourned around the world and the NH Legislature paid tribute to one of the greatest lead dogs in history by naming Route 113A from Tamworth to Wonalancet, New Hampshire ‘The Chinook Trail' in his memory.

Posted by Moosewood Communications at 1:11 PM