NH Gurus
Randy Armstrong’s world music has made him an international icon in the music world, but New Hampshire is still the place where he comes home.
By Patricia Savage 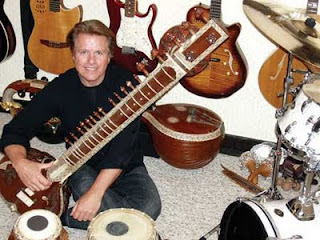 It is still, here on Beauty Hill Road in front of Randy Armstrong’s house. Stillness is not a word normally ascribed to Randy Armstrong whom I have known for nearly three decades. I hang back before knocking. The gray cape cod built in 1836 sits on a slight knoll, sideways to the road. Though it’s been twenty years since horses roamed the field, you can still smell them in the barn. The yard is tidy, groomed. A deciduous forest has dropped its leaves and branches to form the southern border. A mound of forsythia is about to erupt. Randy welcomes me from the deck while noting this sign of renewal. It is already clear how much he loves his new home.

Entering through a front door, the stillness is slowly replaced by the animated conversation I associate with Randy as he points me to his studio. The carpeted room is soft and silent. I can almost hear the phantom echoes of chords that had bounced off the angles of the slanted roof and exposed beams earlier in the day. Lining the floor and walls are dozens of his two hundred instruments from all over the world - an Indian sitar, West African drums, an Egyptian oud. Randy has recorded music in state-of-the-art studios, but he thinks this space is unparalleled for the both the resonance and intimacy it allows him to bring to his music.

Though new to this property, Randy has been living in rural New Hampshire since the early 1970s. He travels not only for performance but also to study with the Garifuna musicians of Central America or drummers in West Africa. The paradox of small town provincial New England as the nest for one of the most globally diverse musicians is not lost on either Randy or myself.
He came to New Hampshire on a music tour with his rock group from Ohio. Initially drawn in by the beauty of the White Mountains region of the state, he also became enamored of its lakes and the ocean. Despite the beauty of the landscape, creating music in rural New Hampshire means a minimum of distractions. Modern technology makes it so that the creation, recording and even the distribution of music can be done from Armstrong’s home. He travels the globe, fusing its people as he fuses the music with his own, making of this planet one great big neighborhood.

Born and bred in the Midwest, Randy credits his mom and dad with green lighting his music career. They may not have understood the music, but they both understood his passion. He studied both trumpet and guitar, learning classical and jazz fundamentals. He was particularly drawn to artists such as Miles Davis and the jazz-rock fusion music that was emerging as he left his adolescence and Ohio behind.

Soon after he came to New Hampshire with his wife Melinda, Randy joined forces with another musician, Ken Laroche from Marlow, NH, who held the same values. Their conviction to create a kind of world music was fueled by the Baha’i Faith, a religion dedicated to the oneness of humanity. They formed DO’AH, combining Randy’s stringed instruments with Ken’s flutes and started to use instruments from all over the world to form a unified sound. “DO’AH,” which means “to call to prayer,” became a successful group with a nationally produced recording label from Philo Records, cutting 5 albums during their 17 years together. The titles alone invoke peace and optimism: “Light Upon Light,” “Ancient Beauty,” and “World Dance.”

Other artists who helped to flesh out their eclectic sound have names that are also recognized throughout the music world. Charlie Jennison on trumpet, Marty Quinn on drums, Volker Nahrmann and John Hunter on bass. Often heard on PBS Channel 11, “Entertainment Tonight” used “Wayo” a piece from their “World Dance” album. Because of the diversity of their sound, they shared the stage with musicians from Dizzie Gillespie to Richie Havens. The United Nations recognized their “Peace Tour” for efforts promoting the peaceful coexistence of all the world’s peoples. In 1992, Randy and Volker created a new group, UNO MUNDO (“one world” in Esperanto), continuing the unity through diversity theme.

Randy Armstrong has not slowed down a bit as he enters his fifth decade. Randy and Volker now play under the name The Randy Armstrong Trio with Jose Duque of Brazil. Randy is an Arts Councilor for the NH State Council on the Arts, and an adjunct faculty member at both Phillips Exeter Academy and Plymouth State University. Last year, he recorded and produced songs for the Tsunami Relief Project CD. A labor of love is his work with Genevieve Aichele, the story-teller. As part of the NH Theater Project, they have collaborated on such activities as a parent-run summer arts camp in Strafford which just sizzles.

What is a typical day in the life of Randy Armstrong? “Everyday, every week is different.” With so many things calling him out into the world, he still realizes that, “As an artist, what speaks is how well you play.” This means frequent practice, that daily solo time when you get intimate with your instrument.

Randy has raised three sons here. His oldest son, Kalim, who also plays the guitar, is a filmmaker in Brooklyn, NY. His West African photo is the cover for his Dad’s latest CD, “No Regrets.” Kalim’s roommate and brother, Day’yan, the first chair for bass in the Western Hemisphere in 2003, attends the New School, continuing his musical education as well as exploring the possibility of becoming the next Jacques Cousteau. Middle child, Julian, a baker in a Portsmouth fine dining restaurant, amazed local audiences as a teen directing and acting in plays in Seacoast theater groups. He and Day'yan performed music under Dad’s direction for the PBS series, “Dinner on the Diner.”

The boys have two-high energy and creative parents, both dedicated to developing the artists in their sons. Though Randy and Melinda are no longer married, they continue to nurture their adult sons and their ideals of peace. They all shared the last two Thanksgivings in Randy’s antique dining room. Recently, Randy brought his drumming to a peace conference in Durham that Melinda had organized.

“No Regrets,” the latest CD, is Randy Armstrong doing solo acoustic guitar. It was born from an appreciation of the richness that comes from life lessons. The CD came out under a DOMO label one week after his mother died. Six months later, his Dad passed away, and then his younger brother, and not long after, his former DO’AH partner, Ken Laroche. It is poignant that at this time of much inner shifting, the artist who has spent so much of his life building the world community should pause and gives us just himself, solo. “Time spent alone is where you get lost in the worlds you are living.” Randy is proud to say that in the day of digital editing, all of these songs were recorded, whole, without editing. Whether playing his own, “Song for Peace” or Miles Davis’ “Blue in Green,” the wholeness comes through.

New Hampshire can take some credit for nurturing this maker of world music. However, it is doubtful that what was drawn from this part of the world can ever measure up to what Randy has brought back to it.

NH Gurus is an ongoing series highlighting NH Citizens who have made a significant mark on the world and choose to remain here despite their National and International reputations.