Kayaking on the Merrymeeting River

Answering the Call
By Barbara Bald 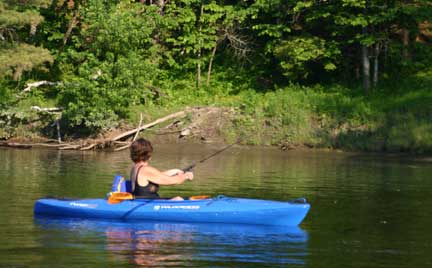 Water comprises nearly three-fourths of our planet’s surface, sustains all life and for centuries has been calling people to its banks. Ancient civilizations have been built around it, transportation required it, and books continue to extoll its healing powers.
Within our own state, early settlements depended on the Gundalow (a flat-bottomed boat) to carry goods between towns such as Durham and Exeter. Our state’s small coastline has invited tourists to Hampton Beach for years. Waterfalls, such as Glen Ellis Falls, have called as sirens to visitors and residents alike. Rivers, such as the Androscoggin, still lure fly-fishermen, kayakers and gold-panners to their shores. Just what is our attraction to water?

For Vicki Howard, owner of River Run Deli in Alton, kayaking the Merrymeeting River is a chance for folks to relax and socialize. Four years ago Vicki purchased enough Old Town kayaks, life vests and paddles to accommodate multiple paddlers. She decided to orchestrate weekly trips up-river and provide scrumptious meals from her Deli.

On this particular evening’s paddle, 22 women aged 25- 65 gathered at the Deli at 6p.m. Friends met friends, strangers extended hands to newcomers and social banter filled the air. Some were veteran kayakers; some anticipated something new. Since Vicki assisted with boats both in and out of the water, experience was not an issue.

The 45-minute paddle was a lazy one up the meandering river. Facing west, early evening sun necessitated shades or visors. White pines peered back from glassy reflections on still water, painted turtles basked on logs and Kingbirds swooped at insects. Raspy Redwings and trilling tree frogs provided the chorus.

For some, the trip’s highlight was getting under the Route 140 “bridge”, where waters, high from recent rains, required scrunching down into the little boats and, with fingertips under bridge concrete, inching one’s way to the other side! Others, choosing an easier route, simply portaged across.

After with a visit from some Canada geese and helping with easy cleanup, we all headed back. Cool night air offered refreshing, bug-free breezes and chances to watch the antics of two young beaver. Rounding the bend at 8:30p.m. Tikki torches at the Deli dock greeted us, topping off this near-perfect adventure. The lure of New Hampshire waters had provided rest and relaxation, a chance to see wildlife up-close and an opportunity to share an outing with others.

Whether you’re looking to sample a lazy fall venture or prefer the rush of white-water in springtime, New Hampshire waters call to us as they did to our ancestors. They beckon us to rejuvenate ourselves in ways that only water seems able to do.

Footnote: Vicki Howard encourages visitors to put her boats in the Merrymeeting River from May 1 through fall foliage season. Weekly Pic-A-Noe adventures described above run from mid-June through August. Vicki can be reached at 875-1000.

Hebron Common, NH in Snow
Prints, framed and unframed
Posted by Moosewood Communications at 11:32 AM