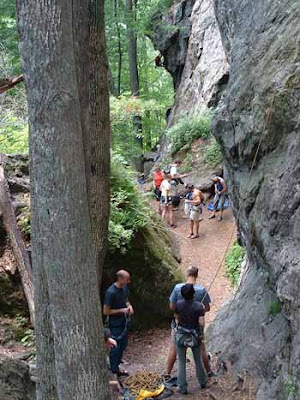 Imagine yourself one hundred and fifty feet above the valley floor hanging from a rope. Below you the winding path of the Baker River meanders through the quaint town of Rumney, NH. Above you the sounds of Hawks and Peregrine Falcons pierce the quiet. Your muscles ache with the exertion of the climb but the adrenaline rushing through your body and the sights, sounds and smells of this place make you feel more alive than you have ever felt before. If you know, or can imagine, this feeling, you understand why hundreds of people make the drive to the cliffs of Rattlesnake Mountain in Rumney every weekend

What began in the 1960's as a few hardy souls playing among the hawks on the cliffs of Rattlesnake Mountain in Rumney, NH, has evolved into one of the Heart of New Hampshire’s most popular natural attractions.

Today, avid climbers head for the cliffs of Rattlesnake in droves for climbing that is easily accessed and among the best in the Northeatern US.

Just 40 minutes north of Concord, NH and only 2 hours drive from Boston, the cliffs of Rattlesnake Mountain are an easy drive for climbers of all abilities and gradually the support infrastructure is growing up to support the growth of this popular pastime.


The Wendall Ascent Begins an Era 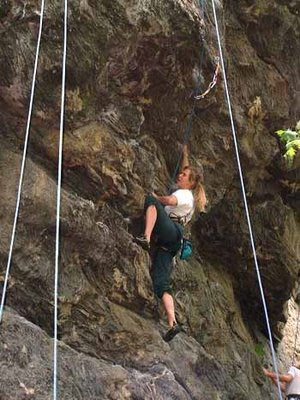 The first recorded climbs on the cliffs of Rattlesnake Mountain appear to have been made in the 1960's by the father and son team of George Wendall II and III for whom a route is named on the main cliff of the mountain.

In the1970's more climbers began to explore and document routes and in 1987 writer Ed Webster first included Rattlesnake among the climbs in his "Rock Climbs in the White Mountains of New Hampshire".

Webster's book brought increased interest in the area but also created new tensions between climbers and private landowners who controlled some of the land adjacent to the National Forest where many of the climbs were located. In the early 1990's these tensions reached a high-watermark when the landowner, concerned with liability issues and a dramatic increase in use, posted the land, prompting a dramatic decline in use. This event was the genesis of a new organization . . . the Rumney Climber's Association. The RCA was committed to taking action to see that Rattlesnake remained open to climbers.

What followed was one of the great examples of proactive cooperation between the National Forest and the climbing community as climbers and environmentalists joined together to purchase the land in question and add it to the National Forest holdings. Once again climbers returned to Rattlesnake to rediscover their favorite routes and the National Forest got on board with parking to accommodate the new crowds and ease the concerns of local folks on their weekly "dump runs" to the Rumney transfer station - located along the same road. 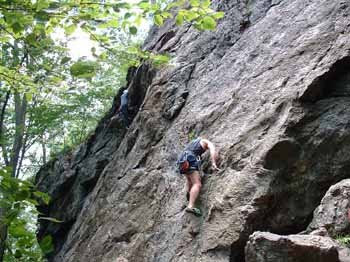 The Rock climbing community has shown remarkable persistance in dealing with the challenges of the growing interest in Rattlesnake and the challenges have not only been between people. Rattlesnake Mountain is also the home to the threatened Peregrine Falcon - only removed from the endangered species list in 1999.

Working in cooperation with the New Hampshire Audubon society and others interested in the protecting the nesting falcons, various sections of the mountain are closed off during the breeding seasons to sustain this remarkable comeback from near extinction.

In 2002 the first guidebook to climbing Rattlesnake was produced. "Rumney", by Ward Smith details more than 400 routes up the cliffs ranging from easy to very difficult has been released and is considered the definitive guide for climbing and bouldering in the area. 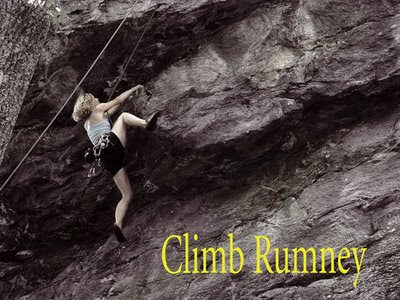 Climb Rumney Poster and Cards
Order here
Posted by Moosewood Communications at 8:36 AM