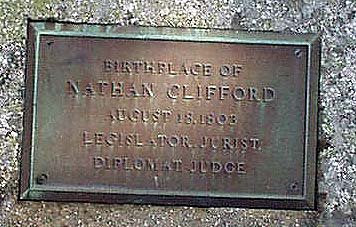 Nathan Clifford (1803-1881)
Nathan Clifford was born on August 18, 1803, in Rumney, New Hampshire. He prepared for college at the Haverhill Academy, and completed his education at the New Hampton Literary Institution. After reading law in the office of local attorney Josiah Quincy of Rumney, for whom the Quincy Road is named, he was admitted to the bar in 1827 and moved to Newfield, Maine, to establish a law practice. Clifford was elected to the lower house of the Maine legislature in 1830 for a one-year term and was re-elected three times , serving as its Speaker during the last two terms. He was then elected Attorney General of Maine by the State Legislature and served in that position from 1834 to 1838. In 1838, Clifford was elected to the United States House of Representatives, where he served two terms. Defeated in a bid for a third term, he returned to private law practice in 1843. President James K. Polk appointed Clifford Attorney General of the United States in 1846. Two years later, President Polk appointed Clifford United States Minister to Mexico. As Minister, Clifford negotiated the treaty which made California part of the United States. Clifford returned to Maine in 1849 and resumed his law practice in the City of Portland. Six years later, on December 9, 1857, President James Buchanan nominated Clifford to the Supreme Court of the United States. The Senate confirmed the appointment on January 12, 1858. Clifford served on the Supreme Court for twenty-three years. Clifford was an associate justice of the United States Supreme Court from 1858 to 1881. During his tenure on the Court, he wrote the Court's opinion in almost 400 cases. In 1877 he was appointed as President of the electoral commission that was convened to investigate and settle to disputed 1876 election between Rutherford B. Hayes and Samuel Tilden and which ultimately gave the election to Republican Hayes. For students of history: guess which state was the controversial and deciding one in this election? You've got it FLORIDA! To make the comparison even more interesting, Oregon was the next questionable state.

Clifford died on July 25, 1881, at the age of seventy-seven. His burial:was at Evergreen Cemetery in Portland, Maine. In the town of Rumney there is a plaque noting Clifford's place of birth along the Buffalo Road, just past the trailhead to Rattlesnake Mountain. Clifford studied law in the Josiah Quincy House located along the Quincy Road adjacent to the Baker River State Forest.

Dean's grandfather and his brothers and sisters all went to New Hampton. One of his grandfather's brother's, Frederick, was headmaster there for many years. All the people sent their kids to New Hampton in those days if they wanted to go beyond the elementary level of the local one-room school house. Our family was from Meredith.

The late Joan Trimbell Smith, of New Hampton painted a portrait of Clifford that now hangs in the U.S. Supreme Court building.


Posted by Moosewood Communications at 6:33 AM