Strawbery Banke: A Seaport Museum 400 Years in the Making 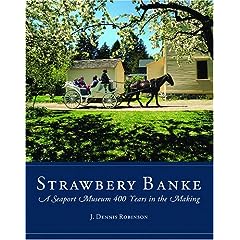 neighborhood, began as a British plantation on a tidal inlet. Abandoned by its

survived to become New Hampshire’s only seaport. A century later the

skilled artisans, and wealthy merchants. When the maritime economy crashed

and the city burned in the nineteenth century, the “Puddle Dock”

neighborhood drew waves of immigrant families to its ancient low-rent

buildings. Then in the twentieth century, fearful of urban “blight,” a federal redevelopment project went

off here like a neutron bomb. The population and the junkyards disappeared, but a grassroots

preservation movement saved many historic buildings from the bulldozers of progress.

Rich with pictures and painstakingly researched, this work is actually two books in one. 􀀁The first

Hampshire natives. The story then goes behind the scenes to the controversial founding of Strawbery

Banke Museum in 1958. Tapping into private letters, unpublished records and personal interviews, the

author explores the politics of preservation in a small blue-collar city. Always lively, this highly

destination, assessing what is gained and what is lost along the way.

J. Dennis Robinson is editor and owner of the popular regional Web site SeacoastNH.com. An

Robinson has published over a thousand articles on local history and culture. His most recent books

include juvenile biographies of outlaw Jesse James and Maryland founder Lord Baltimore, and

Wentworth by the Sea: The Life and Times of a Grand Hotel. He recently received a commendation for

Best History Writer (2007) from NH Magazine, among other awards. He lives in Portsmouth, New

Hampshire, with his wife Maryellen Burke.

Richard Haynes Jr. earned a Master of Fine Arts from Pratt Institute in New York. Born in the South,

he is currently a noted New Hampshire painter, educator, and activist.

Ralph Morang grew up in Rye, and his family has been involved with Strawbery Banke since the

1960s. He has been a freelance -photographer and photojournalist in the -seacoast for thirty years.

Douglas Armsden photographed Strawbery Banke in its founding years. Born in 1920, he lives in

Posted by Moosewood Communications at 7:14 AM