The Making of 55 Degrees Restaurant
Written by Frisky M. Stal 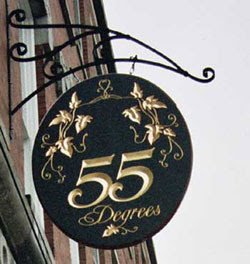 You may have seen an architectural likeness of 55 Degrees in Boston, San Francisco, or Washington, D.C. — a contemporary restaurant housed in an old building that has been restored to its original condition and reborn. The good news is you won’t have to travel far. Fifty-five Degrees is in our backyard, in a three-story building in the historic Morrill Brothers Block at 55 Main Street in downtown Concord. Fast becoming a destination, the restaurant is gaining a culinary reputation under the talented direction of 25-year old chef, Cory Fletcher, and the astute management of its owner, Shannon Drake.

Fifty-five Degrees offers comfortable, relaxed dining, a fun, off-the-beaten track wine list and exquisite tapas, the small plates of Spain that traveled across the Atlantic to California, then worked their way across America to the east coast. In a land of obesity, 55 Degrees offers an opportunity to sample smaller portions, without waddling home with a fat doggie bag. 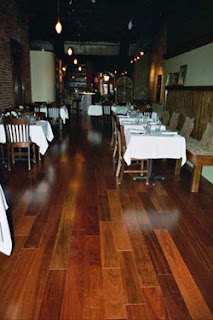 Choosing what to have for dinner presents hard decisions. Yes, there are favorites but they’re difficult to pin down on menus that change frequently. One overwhelming diners’ choice is the cheese plate, offering three selections from six or seven international varieties—cheeses like Humboldt Fog, a creamy to firm California goat with a line of ash running through it; or a velvety, sharp Cashel Blue cow from Ireland; and Chevre Noir, a firm cheddar goat from Quebec that bears no resemblance in taste to a Vermont cheddar. Don’t overlook it. Its chewy texture and mild flavor will surprise you.

The cheese plate presentation includes the slimmest slices of pear plus bread and roasted Marcona almonds from Spain. The jury is out on whether to begin or end your dinner with the cheese plate. Though the French prefer their cheese and fruit plate as the last course, my vote would be to start with the cheese, pairing it with a lovely wine. Not sure what wine? Ask. The wait staff is knowledgeable.

After the cheese plate the small plates fall into two categories. The first ranges through lighter fare, such as a trio of olives, a roasted beet salad with mâche, a scoop of Vermont goat cheese and caramelized shallot vinaigrette, or a shrimp and lobster “roll” with pear tomatoes, basil and lemon oil.

The second grouping is really a small dinner tapas. Combined with a lighter plate or the cheese plate, it provides a satisfying repast. Choose the loin lamb chop with oven-roasted tomato hash and rosemary butter, the grilled breast of duck with roasted corn, tomato and scallion salad and cumin crème fraîche, or the seared sea scallops with sugar snap peas, shiitake mushrooms, napa cabbage and ginger vinaigrette. Keep in mind that by the time this article goes to press, the menus will have changed. What you can’t see are the lovely plate presentations.

It’s best to save space for one of the fine desserts and with small plates that’s easier to do. If you like coffee, try the lovely Lavazza expresso, Don’t let the word espresso, if you don’t drink espresso, deny you the taste of this superior after-dinner Italian coffee. Elegant and soft, it is the perfect accessory for 55’s desserts. Just ask for coffee.

The wine list is hard to pin down. It changes often and offers diners an opportunity to taste smaller vineyards from around the world. Perhaps one of the best features of 55 Degrees is its wide-ranging selection that can be enjoyed by new wine drinkers and knowledgeable wine drinkers. Many wines are new experiences for everyone.

Dinner at 55 Degrees is not requisite. The restaurant is perfect for an early glass of wine and a small plate after work, or a martini at the copper bar located in the back of the restaurant. It’s also a perfect place to sample a new port with a flourless chocolate ganache cake, or a late harvest dessert wine with ginger crème brûlée.

The restaurant began four-course wine dinners this year. Usually the winemaker is present for these events. Cory Fletcher has proved his mettle in matching flavors and textures with the wine selections. You’ll likely discover a few good wines to look for at a New Hampshire food shop or liquor store.

To whet your appetite, the second course at the Page Cellars Wine Dinner this past summer was a Pulled Pork En Croute with Caramelized Vidalia Onions and Plums matched to a 2002 Page Proprietary Red, a blend of Merlot, Cabernet Franc and Cabernet Sauvignon that was bold and long with hints of cedar, dark berry and caramel. Dessert was a Soft Lemon Cream under a layer of spongecake and finished with a lavender mousse. It was paired with a French Muscat de Beaumes de Venise from the Rhone region, with layers of apricot and honey that deepened to dried figs.

The food is one story. How the restaurant evolved, is another. Shannon Drake, the petite owner of 55 Degrees, has spent over 20 years in financial services with one goal; to own a restaurant or a gourmet business. I’ll let her tell the story.

“All my life I’ve been a foodie. Everything I did evolved around food. I’ve also been dabbling in wines for some time. About six years ago I began looking seriously for real estate to lease or purchase for a restaurant. Concord, to me, was an opportunity market.

After five years of looking at properties, with my patience worn thin, my real estate agent called to tell me the perfect property had just become available. I was too tired to look. I didn’t need another disappointment. But she was adamant, insisting that I come downtown and look at what was formerly a florist shop. The building was long and narrow. It had a dropped ceiling, pegboard walls and a tired floor. It wasn’t my beautiful restaurant…but it ignited my thinking. I could see the diamond in the rough— a refined yet rustic atmosphere with simple lines, inviting and comfortable. It was perfect.

I bought the building in September 2003. Demolition work started in December. Dave Wheeler, my life partner and currently the chief of police in a nearby town, embraced the project. Without him, I don’t think 55 Degrees would have happened. We began by peeling off four layers of walls, not sure what the final wall would be until one day, there it was. Brick! That was an unexpected gift. We also discovered a beautiful old safe with fine 19th century hand-painted decoration. It’s still in the brick wall where we found it. The ceilings were then stripped. This time we tore through three layers until we reached the second floor rafters, leaving them exposed for the huge black heating conduits. We worked nights and weekends. I still had my real job and Dave had his. By the time we were down to ‘the bones’ we had taken out 20 tons of debris!

Then the real work of making a restaurant began. Walls were repaired, the bricks were acid washed, the staircase to the second floor was reconfigured and Dave designed new bathrooms, borrowing beautiful oak doors from the third floor. For the design of the kitchen, I hired a consultant.

In the middle of this immense project my mother passed away. It was a difficult time. I spent three to four months dealing with family issues. I had hoped to open in the fall of 2004 but it was January 14, 2005 before we opened our doors.

I’m a big believer in, ‘things happen for a reason.’ While talking to one of my wine reps about the importance of finding the right chef, he blurted out, ‘I know just the guy.’ Cory Fletcher called me, we met, and that was it. We were on the same culinary page. Cory had worked as a line chef at two Four Diamond restaurants, had an excellent education, and wanted to broaden his perspective by working on small plates, something I knew I wanted to do from the beginning.

The name for the restaurant turned out to be a struggle. I wanted to keep it simple and I wanted to tie it to wine. Eventually I got to the name after going through a litany of other possibilities. We’re located at 55 Main Street and fifty-five degrees is a perfect wine temperature. In the end, the name was simple.

The idea for the logo was in my head. Someone put it down on paper for me, One day while driving through Vermont I passed a shop displaying just the type of wood sign I wanted. Things happen.

Everything selected for the restaurant was done with a great deal of analysis, thinking and rethinking. There were many dinners at other restaurants…looking at napkins, glasses, plates, silverware, the way salt and pepper is handled, table lighting, flowers, little touches, and wait staff. Sifting through all the possibilities, decisions were made that I still feel very comfortable with and that I would not change. The little things combine to make a big difference.

Since I would be handling the wine list, I wanted the right glasses, finally settling on a classic shape for reds and whites. When working on the wine list, I try to focus on small producers around the world. We have developed a more eclectic sampling of 50-75 wines, ones less familiar. You probably won’t see a Mondavi or a Kendall Jackson but the enjoyment at 55 Degrees is trying good, less well-known wines, some quite spectacular. Our wait staff is very familiar with the wines, as well as the menu. I think that’s important.

Instead of butter we serve bread with a white Tuscan bean dip and balsamic vinegar, although butter is always available on request. But the bean dip is a nice 55 touch.

Initially our customers came from Concord and nearby towns, such as Bow and Hopkinton. Now they also come from Bedford, Plymouth, Canterbury, Laconia, many places around the state.

In June 2005, 55 Degrees won Best Main Street Restoration in the State Of New Hampshire. Dave and I were proud of that award. We, more than anyone, knew what it took to get there.”

Shannon Drake will tell you to follow your dream, to never lose sight of your goal, to have a plan and stay focused and fortunately for the rest of us foodies, she has been true to her word.