Littleton, The Little Town that Could - The Early Years 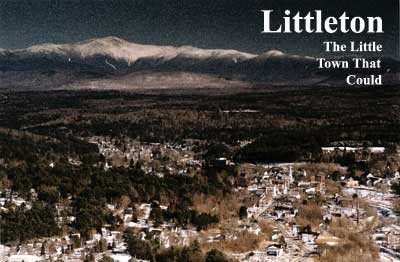 Building Community and Developing Economically in the North Country
Written by Wayne D. King
First in a series of five
Part One: The Early Years – Crisis, Hope and Hard Work

Walking through Littleton is, at times, nearly a spiritual experience. There is a spirit in the air that one rarely finds these days. A pride, a sense of place, a community ethos that is quite nearly palpable. The storefronts are full and when word goes out about available space, a new business pounces.
Over the past two decades nearly every town in America has added the catch phrase “Economic Development” to its vocabulary but few have found the formula for making robust growth a reality. . . Littleton is an exception. In just over two decades Littleton has become a model - not only for New Hampshire - but for the nation in this area. What’s their secret? Hard work no doubt plays a critical role, but just as important is that they have focused on building a powerful sense of community at the same time that they have focused on the more commonly known fundamentals for economic growth. They have built Social Capital at the same time that they have improved infrastructure and other fundamentals of economic growth.
It was not always this way.

In the early and mid 1970’s Littleton was a town in crisis – economically and socially. Nearly 1/2 of the storefronts on Main Street were vacant; jobs were scarce and unemployment hovered around 15%. What jobs were available were, by and large, low paying, low skill, often piecework jobs.

“I remember clearly watching ladies walk out of the footware factory with their arms filled with supplies to make shoes at home,” says Paul McGoldrick one of the architects of Littleton’s now-vibrant economic atmosphere. “The young people just moved away once they were through with school.”

It was at that time that a group of local visionaries, both longtime residents and newcomers got together to take action. It all began rather awkwardly at first. The group would gather and discuss how to bring new businesses to the area. When they heard about a business that might have an interest, according to McGoldrick “We would go bang on a local farmer’s door and see if he had some land available. It was a seat of the pants effort, but it was a start. One day we were meeting with Paul Guilderson from the state’s office of industrial development and in the middle of our discussions Guilderson banged his fist down on the table and proclaimed

“Damnit I’m done bringing anyone up here until you folks get it together and develop an industrial park!” Within weeks, the group announced the formation of the Littleton Industrial Development Corporation a nonprofit group headed by newcomer and Harvard Business School graduate King Covey.

Posted by Moosewood Communications at 2:23 AM