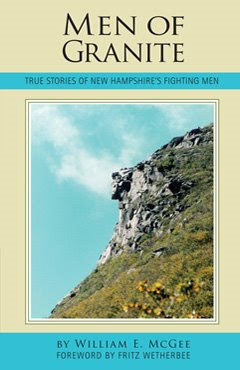 This paperback, non-fiction title contains the true stories of forty-nine of New Hampshire’s fighting men from the year’s 1755 to 1991. Bill McGee has profiled soldiers, sailors, marines, and airmen who made significant contributions in service to their country from the French and Indian War to Iraq.

There are Medal of Honor recipients, an astronaut, and men who were the namesakes of Army forts, an Air Force base, Army airfields, and Navy destroyers. Discover the admirals, generals, privates, and corporals—submariners, parachutists, and fighter pilots from New Hampshire . . . Granite Staters . . . Men of Granite.

About the Author:
William “Bill” McGee was raised in Milford, New Hampshire and graduated Milford High School in
1955, and the University of New Hampshire in 1959. He served in the New Hampshire National Guard
as an Artilleryman, was a 2nd Lt. in the U.S. Army; and an Army Aviator, rated in both helicopters and
fixed-wing aircraft. He served five years active duty. During his 12 months in Vietnam, he was promoted
to Captain and flew over 400 combat missions, rescuing wounded American and Vietnamese soldiers.
McGee is an Eagle Scout and a Silver Beaver. During his forty-five years in Boy Scouting, he has
been a Cub den leader, Scoutmaster, and Woodbadge trainer. He has served on the boards of the Lee
Scouting Museum in Manchester, NH, and the Hillcourt Scout Museum near Syracuse, New York. As a
free-lance writer, he has had his stories and articles published in England, Poland, and in the United
States. He makes his home in Liverpool, New York.

Posted by Moosewood Communications at 5:44 PM