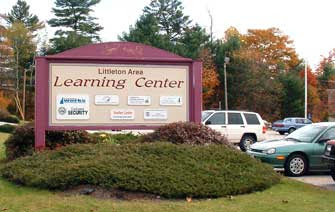 In the early 90’s, community leaders, led by Paul McGoldrick, also a Harvard Business School Graduate, who assumed the Chair of LIDC from King Covey in 1986, began to look at the issue of continuing education. This came partly as a result of the advocacy of local insurance agent Bruce Hadlock - who had played an ongoing role in the economic development of Littleton. At the time, post secondary opportunities as well as professional development training for local residents meant driving at least an hour or more. McGoldrick saw an opportunity and he pressed others into action. Paul Denton, President of the Northern Community Investment Corporation and members of the LIDC joined together to craft a proposal that turned an unused building into the Littleton Learning Center. Bringing together the Community Technical College, The University of New Hampshire College for Life Long Learning, and state and local agencies they developed a plan to provide opportunities for improving job skills for existing businesses, providing needed educational opportunities synchronized with local job opportunities and space for specialty classes and continuing education seminars. Today the 30,000 square foot Littleton Area Learning Center is a high tech educational resource center housing the College for Life Long Learning, The NH Community Technical College, The Gregg Public Safety Academy, New Hampshire Works, the North Country Health Consortium, the Northern NH Area Health Education Center and a Teacher Center serving as a professional development resource for teachers from schools in Littleton and the surrounding communities.

The Littleton Area Learning Center proved its worth thirteen days after September 11, 2001, when Hitchner Manufacturing announced that they intended to leave Littleton. Led by Town Manager Don Jutton a “SWAT” team of citizens, including Paul McGoldrick, Brien War, John Simpson, of the US Small Business Development Center, and representatives from the Learning Center’s various resources, swung into action. They met with leaders of the company and determined that the principle issues evolved around the need to increase productivity and enhance their workforce. Together they devised a training program that would meet the company’s needs and on Christmas Eve of 2001 Hitchner announced that they would be remaining in Littleton.

Littleton has come a long way. In 2003 Littleton was named a “Great American Main Street” by Main Street USA Inc. a national nonprofit that works to assist communities with the main street development efforts. Long time resident Bob Copenhaver originally got Littleton into the Main Steet program but years of hardwork by many citizens and an investment of more than 195,000 raised from the town and its businesses, culminated in the award of which they are exceedingly proud.
A National Model

Developing this vision and formula for success was not easy and for Littleton it was an evolutionary process, but being on the vanguard usually is. Today, aside from the success of the industrial park, Littleton has an unemployment rate of 2.0%. It has among the lowest electric rates in all of New England; Its tax base in only ten years has nearly tripled and it has become a national model for small community economic development.

Part of being a true model, however, means that your work is NEVER done. Littleton is not resting on its laurels. It is looking to the future and planning. Right now they are engaged in discussions with Lisbon and Bethlehem about a three-town industrial park, called the “Tri-Town Initiative”; they are also in the Initial stages of the development of the Littleton Arts Museum, highlighting White Mountain Art and Littleton’s historic dominance in the Stereoscopic art industry. Ron Murro, who developed another centerpiece for town, The Grist Mill, is one of twelve citizens working to make it the dream of a museum a reality.
It has not been an easy process, but one thing is clear: It works . . . and it is infectious. A strong sense of community feeds on itself. Littleton seems to have found the formula: Communication, cooperation and investment in both economic infrastructure and people have brought about a town that sparkles in every sense of the word.

To learn more about Littleton visit their Website www.littleton.nh.us
Parts [I] [II] [III] [IV] [V]
Posted by Moosewood Communications at 5:40 AM