Getting closer and closer 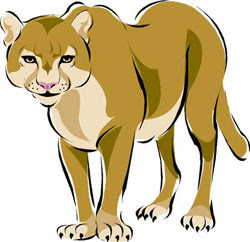 Written by Joe Dambach
To train for the Newton’s Revenge bicycle race up the Mount Washington Auto Road, I would drive to the base of Mount Kearsarge in Warner, New Hampshire. On an early Saturday morning in June, I was the first one on the mountain. The summit road ascends 3.5 miles through the park's 5,000 thickly wooded acres.

A half mile into my ride I noticed something on the road. As I looked at it, my thoughts shifted from deer to coyote to dog to…? The animal was walking---traveling the same direction---up the mountain. Sitting on my road bike, I was a quiet rider, making virtually no noise at a steady 4.5 mph pace. I was not far enough into the ride to be breathing heavy.

After staring at this animal for a few seconds, I realized it was a large cat. A mountain lion (also known as cougar). His body had a uniform tan-brown color and a long tail. The tail sagged down and then curved back up, creating a smiley face arc. I continued to pedal in awe, maintaining my cadence, when I realized I was closing the gap. I was getting closer and closer.

Then it dawned on me, if I got too close, he could turn and attack. If so, I'd be defenseless. First, my feet were clipped into the pedals, practically locking me to the bike. Second, the road was so steep, it would take me several seconds to maneuver a u-turn (without falling over). By that point, the mountain lion would have leapt onto my back, his jaw biting and then snapping my neck. He was certainly large enough to take me down, like a scene from an African wildlife show where a lion takes down an antelope---with ease. I imagined him dragging me off into the woods, bike in tow.

So I did the only thing I could think of, I yelled, a deep roaring AHHH! The mountain lion jumped into the air, while turning his head to see what just spooked him. He leapt several feet off the ground, landed, and then took off into the woods with two long cat hops. As he ran into the woods, he stole one last glance at me, with a look on his face like: what the bleep was that? I continued up the mountain without breaking stride, albeit looking over my shoulder often.

Posted by Moosewood Communications at 4:33 AM