The Ledyard Free Bridge was built in 1859. It was the first, and for many years the only, free bridge over the Connecticut River. The first bridge between Hanover and Norwich was built in 1796 and collapsed of its own weight in 1804. The second bridge, built in 1823, was destroyed by fire in 1854. In 1935, the present steel and concrete bridge replaced the Ledyard bridge.

Before the building of the Ledyard Bridge, Ferries were used to move people, livestock and products across the Connecticut River.

Covered bridges were considered to be great boxing rings, which, according to some historians is why Norwich University moved from Norwich to Northfield, Vermont in an attempt to stop the Ledyard Bridge boxing bouts between their students and those of Dartmouth College.

This covered bridge was named for John Ledyard who made a canoe from a tree near this spot, then left the College, paddling down the Connecticut River to the coast, to set out upon a life of travel all over the globe.

After the bridge burned down in 1854 some local residents made and sold souvenirs made from boards of the bridge. Some of those souvenirs still exist in the collections of Dartmouth College. 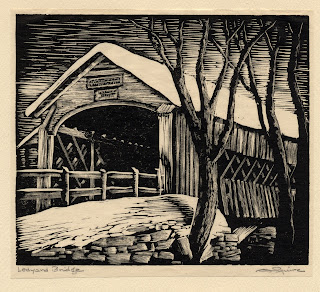 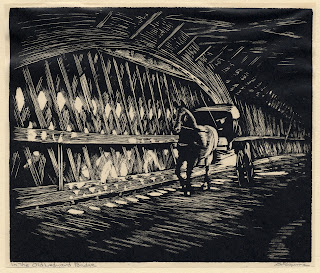 Posted by Moosewood Communications at 7:27 AM