Colors of the Heart - The Art of Cameron Sinclair 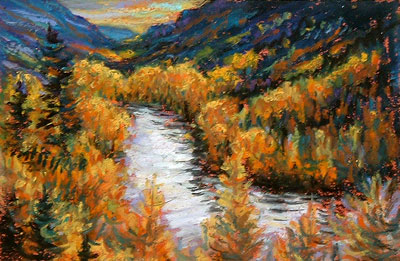 Talk with almost any New Hampshire Gallery owner these days and ask who is the New Hampshire artist with whom people fall in love and chances are pretty good that he, or she, will lead you across the room to a painting signed “Sinclair”. Most likely, your eye has already been drawn by the bright, often swirling, colors that evoke a powerful emotional response. Not an “I’ve been there” response but rather a “this is how my heart sees” response. Because Cameron Sinclair, better known as “Cam”, captures what the heart sees.

Cam Sinclair was born in Shanghai, China, and raised in Bombay, India and American missionary boarding schools until age 14. He returned to the United States at 14 to attend the Valley Forge Military Academy in Pennsylvania for four years. From there, Cam Sinclair went to Springfield College in Massachusetts as a physical education major. Along the way Cam became an All American Wrestler and finished second in the National (NCAA) Tournament while at Springfield College.

Not exactly a typical resume for an artist . . . so where did the interest in art develop and evolve into the work Cam does today?

“When we lived in India, there was no television in those days and my parents would spend evenings doing “paint by numbers,” Cam laughs. “My brothers and I would gather around the table and watch them paint. The various colors, smells, and brushes fascinated me.”

On a furlough back to the states, his parents introduced him to a neighbor and friend of theirs, William Watson. He had an art studio above his garage with a pool table and Cam would often venture up and watch him paint. “He was patient and took the time and interest to answer my questions,” says Cam. “Mr. Watson usually had three or four of his cronies up in his studio playing pool while he painted. It was an atmosphere I never experienced before and I was absolutely mesmerized by it. It was an experience that has impressed me and stayed with me my entire life.” 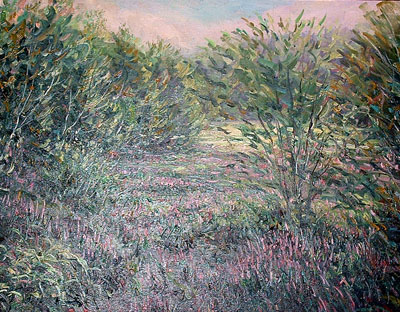 It was during his final days at Springfield College that Cam decided to give art, and more specifically oil painting, a try. He and his wife-to-be, Sherry, went to a fellow wrestler’s apartment for dinner before graduation. During the course of dinner, it came out that Cam’s wrestling teammate was a painter. He pulled some paintings out of the closet to show Cam, and the final spark was ignited. A week later, while discussing their wedding plans, Cam told Sherry that he would like a painting set as a wedding present.

There were a few lessons from some local artists in the early years, but by-and-large Cameron Sinclair is self-taught. Which is to say that his art springs from his heart and his soul. Pablo Picasso once said: "Every child is an artist. The problem is how to remain an artist once he grows up." Just looking in Cam Sinclair’s eyes gives one a view of how he has been able to retain his inner child. His easy manner, his smile, his modesty - all have a child-like quality to them that is immediately noticeable.

Over the years, Cam has tried various mediums including oil, acrylics, watercolors, soft pastels, and oil pastels. Lately, he has gravitated mostly towards oils and oil pastels.

Most of his work focuses on the rural New England landscape. “I love mountains and valleys, rivers and lakes, old stone walls and fences, and how the light plays on these subjects, particularly in the early mornings and evening,” Sinclair says with a twinkle in his eyes. “There is something peaceful and reassuring that I find in the early morning and evening hours and I try to capture the various moods that the lighting creates during these times of the day.” 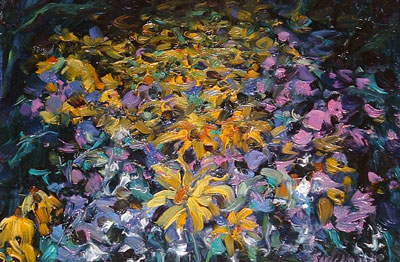 Over the past twenty-five years, Cam has won numerous awards at various outdoor art shows including Best in Show at Cape Elizabeth, Maine; Norway, Maine; Littleton, New Hampshire; and Plymouth, New Hampshire. His work can be found in galleries like the Surroundings Gallery in “Art-Conscious” Sandwich, NH; The Fore Street Gallery in Portland, Maine; and, Downtown Artworks in his hometown of Plymouth. But the truth is that Cameron Sinclair is an undiscovered treasure because he would rather paint than market.

The past thirty-four years have seen Cam work as an elementary and high school guidance counselor in a number of New Hampshire schools. He’s also been a wrestling and soccer coach during all these years. In 1994 Cam was inducted into the New England wrestling Hall of Fame, and New Hampshire Coaches Hall of Fame in 2000.

To some, the competitive athletic side of Cam’s personality is incongruous. They see a puzzling contradiction between Cam the gentle and sensitive artist and Cam the intense and aggressive coach. A contradiction they are unable to reconcile in their own minds. Cam points to author John Irving who expresses himself artistically through his writing, but is also a “died in the wool” wrestling enthusiastic and coach. “Wrestlers are actually pretty gentle in nature,” Sinclair says, “but express themselves through their wrestling. Each match is similar to creating your own masterpiece; each wrestler approaches his matches differently than other competitors.”

While Cam loves working with children in his capacity as guidance counselor, the day will come when he retires to become a full time artist. “I will probably look to go to more art shows and get my work into more galleries, ” he says. But he’ll still referee soccer and wrestling. Ahhh the smell of linseed and the shrill of a whistle on an autumn day . . . it sounds like a nice combination to us. Especially if it means more of those works signed “Sinclair”.


This Website is supported through the sale of cards, prints and posters. If you enjoy the site and would like to see it continue, please consider making a purchase. Or make a simple donation to allow us to continue.


Posted by Moosewood Communications at 8:06 AM