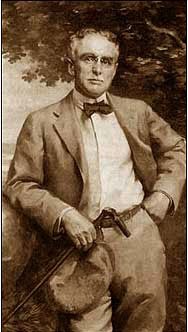 Born in 1859 to Antoine Plant(e) and Sophie Rodrigue, recent emigres from Canada, Thomas Plant grew up in a working class family in Bath, Maine, in a French-Canadian neighborhood known as "French Hill". Father, Antoine, had been a seaman, as well as common laborer in town and volunteered for duty in the Union Army in the Civil War. Antoine was wounded during an infantry charge against a Confederate position in Virginia. He was taken prisoner, and later exchanged for a Confederate Soldier.

In the late 1800's few children from working class families "wasted" much time on education - their focus was one directed toward employment, usually as a laborer. Thomas left school at age fourteen, during the depression of 1873, and took work as a boilermaker and an ice cutter. According to the Plant family biography "at this time Massachusetts shoe manufacturers had begun to establish factories in Maine as a strikebreaking tactic against their home shops and Tom became an apprentice shoe laster in one of these "country factories"". In 1880 he moved to Lynn, Massachusetts, then known as the "shoe-making capital of the world" to work in a shoe factory.

Working conditions for laborers in those days were deplorable and many workers suffered ill effects from toxins and machinery not equipped with the safety devices now employed in such shops. Thomas Plant was no exception. Within three years of venturing to Lynn, Plant left for California to recuperate with relatives from eyesight damaged by working conditions in the Lynn factory.

While in California, legend has it that Plant won a bet over a baseball game that was to provide the seed money to begin his own business and at 25 he returned to Lynn and entered into a cooperative venture that would ultimately evolve into a partnership and then his own private company in 1891.

Over the next twenty years, the Thomas G. Plant Company of Boston grew into what was claimed to be the world's largest shoe factory. He built his factory in the Jamaica Plain section of Boston. Though is it unclear whether all of the design work for the factory and grounds were planned by the same firm, the thirteen-acre grounds, and possibly the six-story building itself, were designed by the distinguished architectural firm of Frederick Law Olmsted of Brookline, Massachusetts. Frederick Law Olmsted (1822-1903), one of the nation's leading landscape architects, designed Central Park in New York City and the Fenway and other parks in Boston.

Having grown up in poverty and experienced the depravations of unsafe working conditions and long hours, Thomas Plant was not satisfied to run his business as others did, embracing many early reforms including shorter working hours and creating a company gym for the fitness and well being of employees. Plant was on the leading edge of a reform movement known as "enlightened" capitalism and a supporter of Teddy Roosevelt and the Progressive Party.

Such progressive beliefs earned him the respect of employees but also the enmity of competitors. In 1910 after years of litigation and industrial confrontation, Plant sold his factory to United Shoe Machinery Company and retired as one of the wealthiest Franco-American of his era at the age of 51. Adding what is said to be a 16 million dollar price tag for the business to his already growing personal fortune.

Plant was married twice. His first marriage ending in a divorce that is the subject of anecdotal legend. According to a former tour guide at the "Castle in the Clouds" estate, Plant and first wife, Caroline A. Griggs, 'lived in a beautiful house in Mass. They had a very rocky marriage, but did stay married for quite a while. Mr Plant went away on a trip to France, and asked Caroline to go with him, however she declined. While in France, Mr. Plant met Olive Cornelia Dewey, of California. Olive was a banker's daughter and many years younger, and they fell in love. After he returned to the states, Caroline came down to breakfast one day to find a million dollar check in her napkin roll and Thomas walking out the front door.' The divorce was said to be quick and relatively painless.

Had Plant simply lived his life in quiet wealth after the sale of his business and his remarriage, his story would have largely ended here, but Plant was a dreamer and planned to make the transition from Industrialist to Financier, a transition that did not go well.

In 1912 Plant purchased a tract of land known as Ossipee Mountain Park as well as some additional acreage around it and in 1913 began construction on what was to be his most abiding legacy, a 6500 acre estate in Moultonborough NH dubbed "Lucknow" for city in India where Thomas Plant at one point thought he might like to build his retirement estate. Today known as "Castle in the Clouds" the Plant estate is a major tourist attraction and architectural mecca for those interested in the "Arts and Crafts" movement from which the house's architectural design sprang.

The stone exterior is made from Granite cut from the surrounding mountains. The stones were hand carved by Italian stone masons who, it is said, on a good day could cut and lay in place no more than three stones. Plant ordered that the stones be shaped primarily as pentagons, symbolizing the five great powers of the world. The lumber for the exterior and interior woodwork was cut from the property and hand hewn in the shipyards of Bath, Maine before being shipped back to the site by railroad, boat and horse.

Lucknow was one of the first homes to have a phone, and electricity, which was powered by its own water powered generator. Plant is also reputed to have had the first fire truck in Moultonborough, as well as fire hydrants inside the house. He also had a central vacum system, a self cleaning stove, and a brine cooled refrigerator. Designed by the architectural firm of J. Williams Beal & Sons of Boston, the house exhibits skilled hand craftsmanship in every aspect of its interior and exterior, including abslutely stunning stained glass work, and a number of other technological innovations of the early 20th Century. At the height of construction on the castle it is said there were as many as 1000 workers on the property at one time.

A short man, standing only 5'4", Thomas Plant admired other energetic short men, including Napoleon, the French emperor, and Teddy Roosevelt. Like Roosevelt, Plant also had a love of horses. In constructing his estate he built a carriage house and stable for ten horses and cut 30 miles of carriage roads through the forest for private driving. Mountain fields provided summer pastures and a golf course.

Teddy Roosevelt, whom Plant had both admired and supported was a regular visitor to Lucknow. Some sources even attribute at least some of the bad financial advice that led to Plant's downfall to quiet investment advice from his trusted friend Roosevelt. In any case the investments Plant made including a large investment in Russian Bonds just prior to the Russian Revolution and sugar, prior to a collapse of the sugar market after World War I, would lead to his financial ruin.

After this series of failed investments, Plant attempted, from the mid-1920s through the era of the Great Depression, to sell the mountaintop estate.  However, no buyer was found, and the Plant's continued to live at Lucknow until Tom Plant’s death.

Thomas Plant died broke, in 1941, just before creditors auctioned off everything he owned. It is said that a collection had to be taken among neighbors and friends to simply pay his burial expenses.

Posted by Moosewood Communications at 4:41 PM