In the Spirit of Friendship - Bluegrass and Fiddling in NH

In the Spirit of Friendship
Bluegrass and Fiddling in NH
By: Barbara Bald

Imagine yourself, picnic basket in one hand, lawn chair in the other. 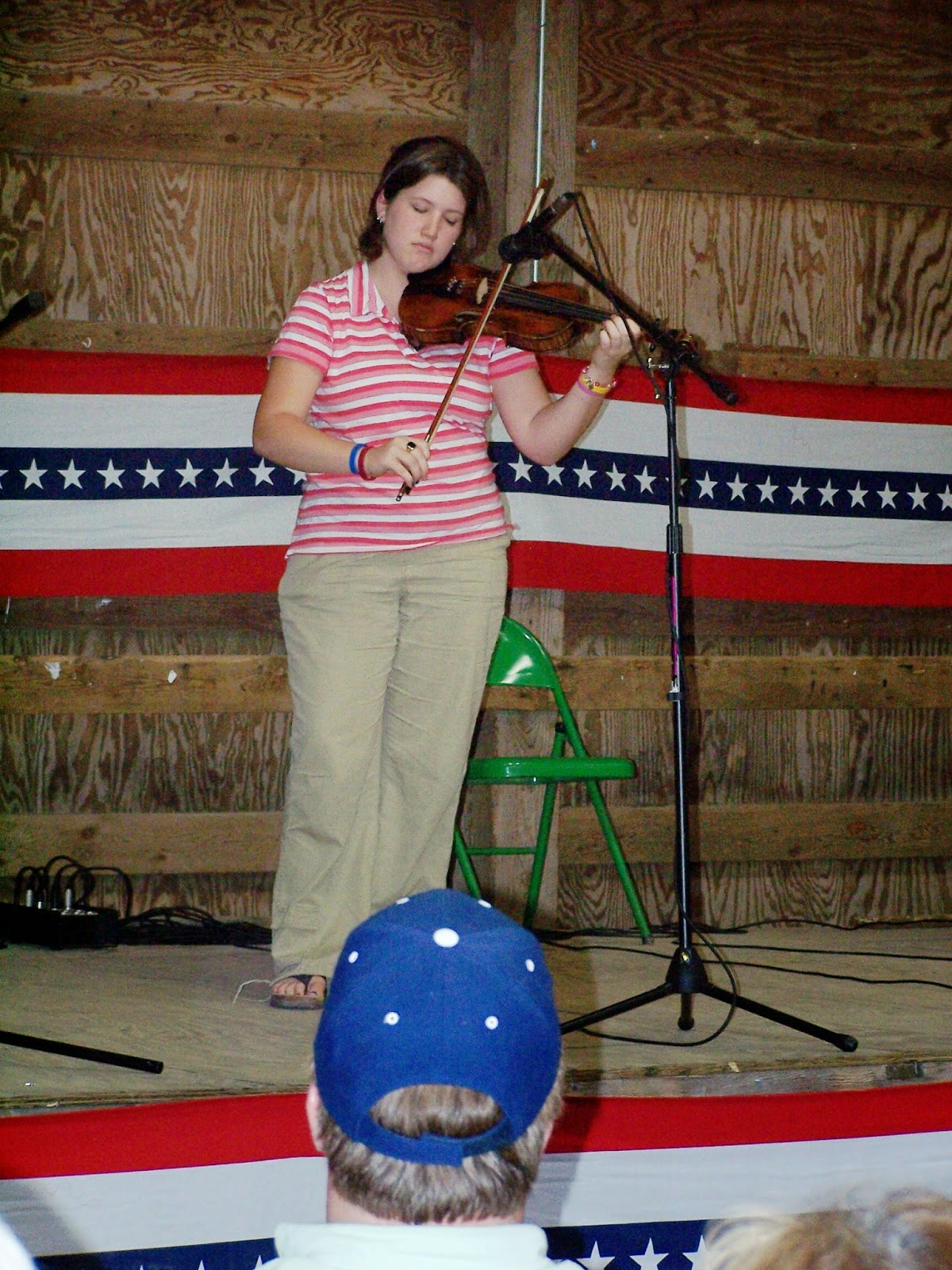 You’ve brought a blanket, umbrella, sunscreen, bottled water and spoons.  Spoons?  What are the spoons for?  To play, of course-- for you aren’t heading to the beach.  Having parked the car, you amble across a grassy field, bound for a bluegrass festival.  You’re looking forward to a light-hearted day and your toe is already tappin’.

What exactly is bluegrass music?  Bluegrass historian Allen Formelo says the origins of this music date back to before the Civil War, when black slaves and poor whites openly shared musical techniques and repertoires.  Following the music’s evolution, Formelo sees the tradition separating into two strands -- black rhythm and blues, and Mountain Music (sometimes referred to as “Old Timey” music and previously referred to as Hillbilly - though that is now considered a pejorative) -- with the latter fragmenting into bluegrass and country.

Author of “Bluegrass is Ever Greener,” T.L. Ponick clarifies further by saying that Mountain Music, with its Irish and Scots-Irish roots, evolved largely in the backwoods of the South, particularly Appalachia.  According to Ponick, when blue-collar workers moved to the cities, their music came with them.  Around World War II, Bill Monroe, star of the Grand Ole Opry and head of the “Bluegrass Boys,” coined the term “bluegrass.”  After that, pioneers of the style, such as Earl Scruggs and Lester Flatt, ran with it.
Adopted by 1960’s folk enthusiasts, Ponick postulates that the music changed again.  This shift moved folk music toward developing social messages and left bluegrass “pure and authentic” to its traditional roots.  Bluegrass ensembles are entirely acoustic, with no electronic instruments or percussion.  Groups generally include a fiddle, five-string banjo, mandolin, guitar and string bass.  Additional instruments may be a guitar and a dobro (a horizontally played, stringed instrument).  Ensembles may be duets, trios or quartets. Vocalists are often males because of the tenor-sound wanted.  Larger groups may include a baritone voice, and bluegrass with a gospel slant adds a bass voice.

Bluegrass, fiddle music and New Hampshire have had a love affair for years, and festivals have “sprouted up” for many reasons.  Begun in 1978 in Franconia, the Hayseed Mostly Bluegrass Festival sought to raise money for a new rescue vehicle for the Franconia Life Squad.  According to Joel Peabody, Brad Parker and Gary Young, a handful of the festival’s organizers, the “gig” lasted until 1994, and not only bought an ambulance, but helped folks in need for many years.

One of New Hampshire’s premier festival is unquestionably the Great Waters Folk festival which, although not strictly bluegrass or fiddling, features its fair share of both. Great Waters Music Festival burst onto the acoustic music scene five years ago and quickly established itself as “one of the nation’s more prestigious folk festivals” according to FolkWax a "by fans, for fans" website catering to the folkmusic crowd. With a mainstage in an acoustic tent that is located on the shores of Lake Winnipesaukee, the setting is one that is unbeatable for both the audience and the performer. On top of that, the festival offers daytime unique and intimate venues such as a music cruise on the Winnipesaukee Belle. Other concerts and workshops are held in the Pinckney Boathouse, Village Players Theatre, and Cate Park Bandstand – all in the beautiful town of Wolfeboro and within walking distance of each other.

Each year, the festival features over 30 artists that include some of the top traditional, contemporary and bluegrass artists from North America. Past performers include the Del McCoury Band, Nanci Giffith, Natalie MacMaster, Arlo Guthrie, Dar Williams, Kate & Anna McGarrigle and many more.

Stark Fiddlers Festival
The Stark Fiddlers Contest is held in the Great North Woods.  In the small town named after General John Stark, who coined the state motto “Live Free or Die,” this festival draws hundreds of folks each season. The contest includes 1st, 2nd and 3rd place winners in each of 4 categories:  Open, Senior, Junior, Trick and Fancy.  While no camping is allowed, the near-by Ammonoosuc River entices visitors who want to fish, swim, sight-see, and hike along its banks.  Additionally there are plenty of great lodging establishments and private campgrounds in the area, so plan to stay a few days and enjoy the Great North Woods. People go to the Stark festival as much for the incredible scenery as for the music but both are great.

Pemi-Valley Bluegrass Festival
Farther down the state, the Pemi-Valley Bluegrass Festival is held at the Branch Brook Campground on the Pemigewasset River in Campton.  Big names from past festivities include: “Nothin’ Fancy,” “Big Spike,” “Smokey Green” and “Grass Routes.”  The three-day event invites camping and offers field-picking, contra-dancing, workshops, swimming, fishing, canoeing and, of course, festival food.
Ossipee Valley Bluegrass and Acoustic Music Festival
The Annual Ossipee Valley Bluegrass and Acoustic Music Festival takes place in our neighbor state, Maine in late July on the Ossipee Valley Fairground in Cornish.  According to festival organizer, Raetha Stoddard, the event was a one-day effort to “save-the-farm.”  In her words, “It’s become an addiction, and they wouldn’t know how to stop it at this point.”  Now a multiple-day event, the festival hosts the New England Flat-Picking and Banjo Championships, and sponsors the New England Songwriting Contest.  It offers camping, swimming, mountain biking, crafts, dancing and field-picking.  “Field-picking,” Raetha says, “is what goes on at campsites. It’s where connections are made both musically and in friendship.”

New Boston Fiddlers’ Contest
More southerly, the town of New Boston sponsor the Annual New Boston Fiddlers’ Contest at the Hillsborough County 4-H Fairgrounds.  Festival spokesman Frank Woodward says this event, which was started to increase attendance at the town’s Fourth of July celebration, now “brings people out of the woodwork.”  Like the Stark contest, there are divisions and prizes for each category.  Unlike Stark, the event has moved inside to a weather-sheltered barn and is part of a larger festival with mud-volleyball, chicken barbecue, cannon-muster and fireworks.

Hidden Treasures
Since much of New Hampshire’s bluegrass/fiddling music is tucked within smaller town events, visitors must be alert for these “hidden treasures.”  In years past you would have found the “Parker Hill Road Band” at Lisbon’s Fall Festival of Art, and enjoyed the “Blake Mountain Boys” at Bethlehem’s Concerts in the Park.  You could have watched Shorty Boulet play the “bones” for the West Stewartstown Lions‚ Club, or heard Skip Gorman play Bill Monroe-style mandolin at the 4th Annual March Mandolin Festival in Concord.
You might look for more informal sessions of bluegrass on Tuesdays at the Stone Church in Newmarket or join fiddling on the third Sunday of every month at the First Baptist Church in Derry.  In fact, “GigMasters,” an on-line agent for local musicians, provides press-kits for 19 bluegrass performers in the Concord/Manchester areas alone!  When you start looking, bluegrass and fiddling seem to be everywhere in the state, in the country, even outside the country.  There are now radio stations, websites, clubs, chatrooms, magazines, books and festival guides to fill everyone’s needs.
What makes this music so appealing?  Perhaps it’s the uplifting spirit of the music, the talent of the musicians and the quality of their music.  Perhaps it’s because “musicians are friendly and easy to meet.”  In festival-organizer Raetha Stoddard’s words, “You never know who’s playing around the campfire.  It could be your neighbor or a famous musician.”  Bluegrass music is often seen as a “team effort” in which, as The Bluegrass Blog implies, “Musicians need to work collaboratively in pursuit of a common goal rather than highlight their own.”  This spirit of friendship and camaraderie seems to transfer to fans as well.


Some of the talented, friendly musicians at New Hampshire’s festivals are indeed neighbors, and they, like the festivals, have been entertaining for years.  For instance, there’s Whitefield’s “Shorty” Boulet, a former police officer and tractor-trailer driver, who at 85 plays both “rib-bones” and hardwood ebony bones at local nursing homes and at the Farmers’ Market in West Lebanon.  Meet Littleton’s Johnny MacIver, a retired carpenter, who’s been fiddling Cape Breton-style for over 22 years.  Johnny, who also plays harmonica and jaw harp, now repairs fiddles and continues to entertain at local senior centers.  There’s also Ed Costello from Massachusetts in his button-covered hat, who used to play with the Back Porch String Band, and who adds toe-tappin’ rhythm to bluegrass melodies by playing heavy-weight paper bags or silver dollars on his belt buckle!  Say “hello” to Gary Young, retired Police Chief of Sugar Hill, who plays still old-time and Celtic fiddle.  Shake hands with Brad Parker of Bow who, when he was two years old, watched Johnny MacIver knockout tunes in the kitchen, and who now fiddles and plays guitar on his newly released CD “Applalachian Gold.”

Special: Best Friend's Song Cards, posters and print. Reduced 50%. This beautiful piece with a quote from an unknown author makes a great gift as a poster, a print or cards. The quote "A friend is someone who knows the song in your heart and sings it back to you when you have forgotten how it goes."
http://bit.ly/1k5s16Z

Bluegrass music, now sometimes dubbed “new grass,” continues to evolve.  Ponick says it’s been influenced by West Coast Rock, cites Emmylou Harris as the first major female bluegrass artist and attributes Ricky Skaggs with “country cross-over” in the bluegrass world.  Allison Krauss and “Union Station,” who were recognized at the International Bluegrass Association Awards, have infused percussion into the form, and the soundtrack from the movie “O‚ Brother Where Art Thou” has introduced traditional music to the general public.
What seems to have remained the same is the spirit of the music.  In New Hampshire musician Brad Parker’s words, “If you make music, you make friends.”  Brad talks about how musicians could easily carry their fiddles from place to place, and how, without electronic entertainment, folks gathered in kitchens for “kitchen junkets” to enjoy music, home-made sweet-rolls and friendship.  Bluegrass and fiddling festivals seem to offer this spirit to both residents and tourist alike.  So, whether you are a bluegrass “addict,” or a newcomer, grab your spoons and head-on out.

See you at the next festival!
Resources:

The Vintage Fret Shop, Ashland, NH • 30 Riverside Drive, Ashland, NH 03217 • 603-968-3346
In our opinion one of the finest music shops in the Northeast, if not elsewhere. Specializing in bluegrass and “old timey” musical instruments but with everything else as well! www.vintagefret.com

-ed's note: Provided by HeartofNH.com to assure that this is not lost.

Posted by Moosewood Communications at 8:00 AM