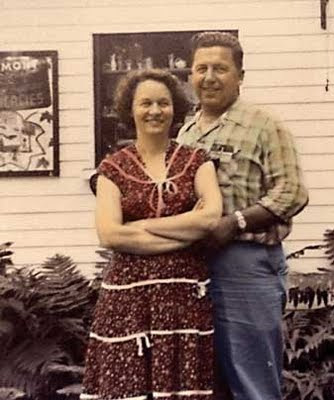 
A piece of rough, rocky granite rises from the grass in the Bartlett village park. It says: “In 1870, Benjamin Sawyer and his partner, Timothy Nash, set out to prove to Governor Wentworth that men and horses could travel through Crawford Notch. The governor agreed to award them with a land grant if they were successful. Sawyer and Nash succeeded with difficulty, pushing and shoving a gentle mare through the Notch, at times lowering her with ropes over steep rock faces. When the final cliff was overcome, local folklore says Sawyer broke his empty jug of rum on the giant boulder, christening it with his name.”

This piece of Sawyer’s Rock represents the traditional landmark for the town line between Hart’s Location and the town of Bartlett. The Rock was partially removed in the summer of 2003 prior to widening U.S Route 302. The plaque was placed by the Bartlett Library History Trustees and the George family in memory of Franklin H. George, an old Bartlett storyteller.

-Franklin was born in Bartlett and built his store - “The What Not” - in 1947. Although my recollections are of the late forties and fifties, he enjoyed the role of genial proprietor until he retired in 1978. His store was across US 302 from the George family home, originally built in 1857. The Bartlett Hotel and the village park occupied the other two corners of the village center intersection.

Since the nearest bank was in North Conway, he cashed payroll checks for employees of the Railroad, Forest Service and Peg Mill and kept up with local news of these businesses.

The town columnist for the weekly North Conway Reporter usually checked with him before sending in her column. Since the town was too small for a police department, Franklin became an extension of the law in Carroll County, with a Deputy Sheriff badge in his wallet.

For many years, he gave cash prizes for the biggest bear and deer shot during the hunting season, along with posting a photo of the hunter, and his bear or deer in front of The What-Not. The picture also found a place on an interior wall of the shop and often in the North Conway Reporter. Although Franklin went deer hunting every year, most of his outdoor time was on the Saco River or one of its tributaries, snagging trout out of the cold-water riffles or trailing his beagle and basset dogs in the snowy woods chasing rabbits. It was usually a slow Sunday afternoon between tourist seasons when the “gone fishing/hunting sign” would hang on the door, or his wife Almeda, sister or niece would be behind the counter. His other avocation was breeding ponies and horses. He had Shetlands and Welsh ponies, and Morgan horses. However, if he wasn’t at the store, returning visitors always asked about him, as he enjoyed chatting with newcomers and making them feel welcome. For summer residents, he arranged for snow removal and for winter residents, lawn care. He could advise on where to find the shy moose, where the best AMC camping huts and shelters were, where land or homes might be for sale and if any jobs where available in the area.
He came from a family line of North Country businessmen, beginning with his great, great, grandfather, Austin George. Austin ran a Conway tavern in 1792 and was the first Postmaster in Conway and Post Rider to Ossipee. He pioneered Passaconway for eight years then settled in Bartlett in 1815.

In 1872, Franklin’s grandfather, Frank George, expanded the farm house and operated it as the “Bartlett House”, a country Inn with capacity for 50 guests, until near the turn of the century. His Grandfather also leased the old “Crawford House”, across from what today is the Notchland Inn but was then called the Unique Inn, in 1875 from Dr. Samuel Bemis (previously owned by Able Crawford) to expand his country inn business. In 1890, his father Clarence and his Uncle Winfield were doing business in Bartlett as “George Bros., Dry Goods, Gent’s Furnishings, Boots & Shoes”. Clarence later operated the Post Office in Bartlett from 1915 to 1925.

With family roots deep in the Saco Valley, Franklin knew the lore and legends of the White Mountains and enjoyed story telling. Saco Lake, at the summit of Crawford Notch, is the origin of the valley’s river. It tumbles down through the notch, and meanders through Bartlett, Glen, Intervale, North Conway and Conway before traversing Maine to pour into the Atlantic. As an Appalachian Mountain Club (AMC) member, he was familiar with the stories of landslides, floods and rescues in the Presidential Mountain range and the associated notches.

Although one friend called him a “Teller of Tales, Tall and Small”, most of his stories had a strong basis in fact. Of course, he told the classic area tragedy of the 1826 Mount Willy slide in Crawford Notch and sometimes the lesser-known devastations on the Rocky Branch and the Ellis River from the same storm. In addition, he occasionally recalled the vintage stories of the eccentric Dolly Copp, who said “50 years was long enough to spend with any man in Pinkham Notch”, and the faithful Ruth Colbath of Passaconaway who kept a window lamp lit for 39 years waiting for her wayward husband to return.

However, local stories and anecdotes were his real stock in trade. There was one about his nephew, Roger, who uncharacteristically was involved in a fistfight while playing tag football after school. When the beaten boy’s parents called to complain, Roger had to answer to his Uncle Franklin, as his father was out of town. As Roger told it, he was simply defending his mother’s honor by blackening the eye of Melvin, who called her a “bad name”. Following a lengthy inquisition, it turned out that a hard block by Roger on a right sweep had inspired Melvin to mutter the phrase "you S.O.B." and a black eye and puffy lip resulted. I don’t remember what Roger’s punishment was, but I know Franklin got a kick out of his creative rational. A slight truth twisting in stories may be a family tradition, as later in life, Roger gained a wide reputation for verbal entertainment at his barbershop in Grafton County.

Special: Best Friend's Song Cards, posters and print. Reduced 50%. This beautiful piece with a quote from an unknown author makes a great gift as a poster, a print or cards. The quote "A friend is someone who knows the song in your heart and sings it back to you when you have forgotten how it goes."
http://bit.ly/1k5s16Z

There was always a fresh‚ bear or deer anecdote along the lines of - “Just last week, Mrs. Gardner said that she had to resort to throwing cherry bombs at a bear to get it to leave her garbage pail alone." However, the latest deer-car collision story was usually a true one - and not to be taken lightly. Franklin was not above telling about the misadventures of his own children. One morning he told the coffee gang how he had to pay Richard Garland for milk that Richard’s cows didn’t produce. Apparently, his horses were seen chasing cows in Garland’s pasture the previous afternoon. It turned out that one of the George boys and a friend rode the horses into the lower pasture after a trail ride on Cave Mountain and decided to play cowboy with the cows. The boys herded the cows up and down the large pasture until the cows were quite annoyed with the game, and refused to milk that evening.

Then there was the one about one of his boys knocking his 10 year old best friend into a construction ditch where he hit his head on a pipe and came out bleeding and screaming. Since the incident occurred close to the youngster’s home, the bleeding boy quickly armed himself and the ladies having coffee on Elsie Hodgkin’s porch witnessed one boy chasing another down Albany Avenue screaming vengeance and waving a hatchet. When the boys reached The What-Not, Deputy Sheriff George took control and since the boy’s dad was a widower and working, Franklin drove the sobbing boy to Nurse Nellie’s home for head repair and calming.

There was village pride in the story of the summer girls‚ softball team coached by Fred King. Fred was a frustrated Red Sox fan and in 1948 took up the challenge of organizing and coaching a girls‚ softball team, sponsored by the local Francis Murphy VFW Post. The team was composed largely of high school girls and recent graduates. They won 11 of 13 games played in Carroll County that year and Fred arranged a more ambitious schedule for 1949. That year the schedule expanded to 50 miles from home. The team won 19 of 21 games, averaging 18.9 runs per game to their opponents 8.8. This record resulted in an invitation to the State Championship Tournament in Dover. The Bartlett “Cinderella” team played the cities of Manchester, Keene and Dover. They lost, but played well, enjoyed the trip and were pleased to see their names in the state circulated Manchester Union Leader newspaper.

Similarly, the unique product of the Peg Mill, managed by Bill Hodgkins, was something special. Annually turning 12,000 cords of white and silver birch logs into polished birch pegs, 1/8-1/2 inches long and 1/16-5/16 inches square, was an unusual business. Custom-made boot and shoe craftsman Peter Limmer in Intervale, was a peg customer, and Franklin testified to the value of custom shoes for a 6 foot, 225-pound flat footed man who was on his feet from 8AM to 9PM every day. He also claimed that his Limmer wading boots were what kept him upright on the rocky-bottomed Saco.

Franklin took pride in describing the everyday heroes of the Saco Valley to “flatlanders”. Merton Ward, a Saco Valley snowplow driver with the Blue Angels, was one. The Blue Angels were the State Highway Snowplows with their flashing blue lights. In an era before cell phones, nothing was as welcome as that flashing blue light in a snowstorm if you were off the road, stuck in 3 feet of snow. Another was Fred Washburn, whose steady hand held the throttle on a Mountain Division Maine Central locomotive heading north through Crawford Notch, in a winter deep with snow. With helper engines and snowplows added at the Bartlett Roundhouse, the crew would challenge the steep grades and snow clouds of The Notch, carefully crossing the Frankenstein Trestle and clinging to the cliffs until they emerged through the pass at Mount Willard.

After his three children grew up and went off on their own, Franklin began to reduce his store hours and hire others to pinch-hit for him, so he and his wife, Elmeda, could take vacations. However, his heart and mind were always rooted in the Valley of the Saco and the White Mountains. When he died in 1989, it was his request that any donations in his memory should go to the Bartlett Public Library’s History Fund.

Editors note: We invite you to share your stories of interesting folks from the Granite State with us.

Passing the Torch - Father to Daughter: Cards & Prints
Posted by Moosewood Communications at 7:47 AM