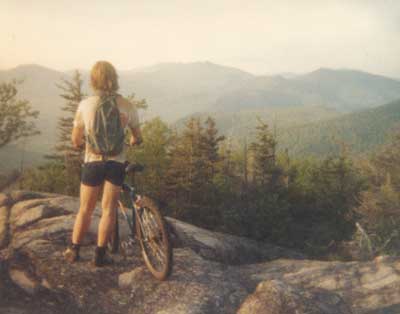 It started out innocently enough. Midsummer, in 1981, Jed, George, Mark and myself set out for a mountain bike adventure. Now bear in mind, we didn’t really have mountain bikes yet. Mine was the best equipped with 10 gears. It was a Schwinn “King Sting”, the 26" cruiser version of their BMX frame. The other guys were on other BMX cruisers adapted to riding in the woods with 5-speed freewheels.

Some fateful decisions were made at the car. First off, we got on our bikes at 2:30 in the afternoon. No big deal. The proposed ride was only 15 miles (or so). I remember Jed rummaging through his pack:

At this point, I’d better confess this was all my idea. As we pedaled up Rt. 302 toward the Dry River Trail I recited to the guys, “The AMC guide describes it as a ‘carefully graded bridal path’, once we get to the height of land we’ll be able to ride back down the Montalban Ridge to the car.”… words I’d live to regret.

Not far up the trail it became apparent (or should have anyway) that the guidebook description was a bit out of date. Where the trail had at one time followed an old logging railroad bed, it now meandered first up one side of the valley, then back down and up the other on what the AMC likes to call “highwater by-pass trails”. So began the first of many portages - a term we thought applied to canoes. The trail was taking us into the Dry River Wilderness Area, this was before the Wilderness Act was enacted so, technically, we were allowed to be there. The laws of nature however are less forgiving and don’t make exceptions for stupidity or poor judgement. We were all pretty experienced in the back-country setting having done lots of hiking, camping, climbing, etc., so we pressed on with me encouraging the group with comments like, “Once we get over Mt. Isolation it’ll be all downhill.” You know, I think they actually believed me. In fact, I actually believed myself and kept saying, “Just one more short quick crux.”

Just as Yvon Chuinard recommended, to avoid carrying the guidebook, I’d memorized our route. Five miles up Dry River Trail, take a right on Isolation Trail 2.5 miles up to the height of land. Then right on Davis Path and “descend” the Montalban Ridge. Some clues I should have caught: First, the word “isolation” kept popping up - Isolation Trail, Isolation Shelter, Mt. Isolation. Second, before reaching the ridge line we had to climb to the 4000 ft contour, once on Davis Path we’d drop down into a col before climbing back up to 4000 feet and the summit of Mt. Isolation. Third, my guidebook must have been a 1934 edition, written when people actually were still riding horses on “carefully graded bridal paths”. But the biggest factor I’d failed to take into account was the windstorm that blasted the White Mountains in 1980. It flattened huge tracts of forest. There were stories of 4 x 8 sheets of plywood flying through the air and getting impaled in freshly built condo’s.

But we were in our 20's and were too busy being “the first people to ‘ride’ (using the term loosely) mountain bikes up here” to let all that grim reality get in the way. Coming from a climbing background of the late ‘70's we’d gotten into doing first ascents. And so when mountain biking came along we adopted the same approach. We were also used to the concept of being “committed to the route”, i.e., beyond the point of no return, but as yet hadn’t had to apply it to a “bike ride”.

So we ate our lunch up there on Davis Path at about 6:30 in the evening. As it turned out, Jed was the wisest of us, he’d brought two sandwiches, one that he liked, the other liverwurst, that he knew he would save until he was really hungry. He also mistakenly left one leg-warmer in the bottom of his pack - more on that later. I actually do remember riding my bike down some of that first section of the Montalban Ridge, wild twisting switchbacks through granite ledges and moss covered slabs. Then reality struck, in modern vernacular - the doo-doo began to occur. Blowdowns. I’m not talking about the occasional inconvenient tree across the trail. I’m talking about ten to twenty trees at a time stacked across the trail like giant pick-up-sticks. If you’ve been up in the sub-alpine zones of New England, you’ve probably noticed how dense the underbrush can be. It’s so twisted and gnarly up there that sometimes you can’t get off the trail if you want to. Now add to that the complication of dozens of piled up trees on the trail, and the fact that we had bicycles with us, and you’ll quickly surmise that some highly imaginative techniques would have to be employed. Did I mention the gathering darkness? I have a snapshot or two of that day. One of them is of my bike on top of Mt. Isolation, at 4009 ft. taken at 8:00 p.m. I’m half-proud, half-ashamed of it.

So here’s how it went. One at a time, we’d toss our bikes up onto the pile of blowdowns, then crawl up to the bike and repeat the process until reaching the other side. We were getting shredded. Our clothing was in ribbons, we were bleeding, bruised and battered. We were still far from out of the woods. Really far. Once over the summit of Isolation we got to the “all downhill from here “ part of the ride. At the risk of being redundant, did I mention the gathering darkness, the blowdowns? Did I mention that mountain biking wasn’t even a sport yet?

At some point, George and Jed had gotten pretty far ahead of Mark and I. We sat and ate the last of our food (Oreo’s). Feeling some urgency, I wanted to keep moving but Mark pleaded, “Please don’t leave me.” This was coming from a guy who’d been a PSC Outing Club Trip Leader, and a very competent technical climber and was usually difficult to keep up with on a trail. But we were at wit’s end. We were out of fuel but we had to keep running on empty if we were going to get back to the trail head. We plodded on pushing/tossing our bikes.

Ahead of us George and Jed were having their own little epic. Just over the top of Stairs Mountain there’s a “T” in the trail. The actual trail goes right and George and Jed went left. It leads to a scenic overlook -overlooking a huge cliff. Now most people would quickly realize that this was not the trail. But we were climbers, cliffs weren’t that big a deal. Apparently at one point George had down climbed to a ledge and was trying to convince Jed to toss the bikes down to him. I still imagine Jed’s famous, “I don’t know, man!” echoing across the Rocky Branch watershed. Jed the model of sound reasoning, refused to throw the bikes off the cliff. George climbed back up and they took the right branch of the trail.

Shortly, Mark and I came to the same intersection, we left our bikes, went and looked down the face of Stairs Mountain, returned to our bikes and quickly decided to abandon them. Without them, we made much better time and caught up with the other two. It was now about 9:30 p.m.,but being the summer solstice, there was still enough light, so Mark and I jogged on ahead down the ridge line. The last summit on the Montalban Ridge is called Crawford Dome. We admired the last traces of light in the western sky, then thinking, “We’re on our way out!” we walked another fifty feet or so and were confronted with an impenetrable blackness where the trail was supposed to be. Did I mention we had no flashlight? But we did have matches! Gathering firewood before it got too dark to find it, we began preparing for an unplanned bivouac.

We built the fire nice and big, hoping the Forest Service would see it and come up and bust us for camping in a restricted area - no such luck. So we each employed our own unique survival tactics. Mark’s T-shirt was absolutely ragged but he got through the night by wearing his daypack on his head. At one point, he was off in the darkness foraging for firewood when we heard a big splash and an “oomph!”, and, after a pause, “I found water!”

I was wearing a wool cycling jersey and so was a little better off, plus I had the map, which, used as a heat shield, allowed me to sit a few inches closer to the fire.

We made a fine feast of Jed’s liverwurst sandwich and divided up George’s two oatmeal cookies. Jed was psyched to find the single leg-warmer in his pack, and wore it on the outside leg, away from the fire, alternating when the inside leg was toasted. We spent about six hours up there on Crawford Dome. *

At about 4:00 a.m. we were on our way down, or at least George and Jed were on their way down. Mark and I had to go back a mile or so to where we’d ditched the bikes. But at least now it was light! We found them, no problem, and actually did get to ride for short sections across granite slabs and soft beds of moss and lichen. Once over the dome of rock we’d slept on, we looked back up and saw two bears sunning themselves on a ledge not far from our bivvy site. We quickly turned and rode/tumbled our way down to the car.

But our troubles weren’t quite over. When George and Jed got back to the cars, they found George’s VW had been broken into. They took some clothing and all our money. George was hit the hardest, he had several hundred dollars of someone else’s money that was to be used for materials for a masonry job. Mark’s car hadn’t been vandalized so we made him buy breakfast. We finally got home about 24 hours after we’d left, had another breakfast, and went to bed for the day.

Birch on Stinson Brook
Purchase framed image or prints
Posted by Moosewood Communications at 10:59 AM