Fishing Along the Thirteen Mile Woods - Errol to Milan, NH


The Great North Woods area of New Hampshire features some of the best fishing and canoeing in the state, including the Thirteen Mile Woods area along the Androscoggin River.

The terrain varies from peaceful meandering stretches of river through boreal forest to the wild rapids of Pontook and the great spots just below several dams along the river.

If you are a fisher who enjoys the early morning hours or the quiet moments around dusk, you are likely to find yourself sharing the river now and then with a moose or a pair of nesting loons.

Depending upon your choice of overnight accomodations your choices range just as broadly from camping at the small and friendly Molligiwock State Campground to "roughing it" at the Balsams, one of New Hampshire's premier resort hotels. 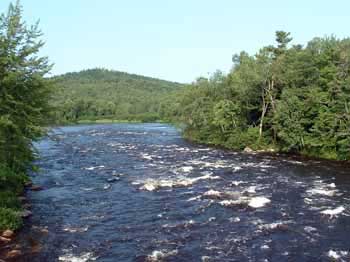 The Thirteen Mile Woods begins just north of New Hampshire's largest northern City, Berlin (pronounced "Burl'n" if you want to talk like a native). Your experience won't just be a few hours of fishing. It will be a trip back into history as well. You'll notice, for one thing, a lot of submerged logs along the river. The Androscoggin River was used for many years to run logs from the forests along and above the Thirteen Miles Woods down to the mills in Berlin. Large formations of rock and logs line the midcourse of the river just north of Berlin.

The Rock Crib Piers in the Androscoggin River were built by the Berlin Mills so they could store the logs until they were needed. The piers were connected by log booms, connected end to end and also by log booms from each pier to the shore line. This created a series of storage areas and as the Mill called for logs, the boom was opened on the downstream side so the logs simply floated to the dam just north of the present day paper mill. From there the logs were taken out of the water, and sent into the mill. At one time, this was done via a steam powered conveyor system.

The rock piers were built in the wintertime. They waited for the ice to form so they could drag the rocks and logs out to the middle of the river. They were then placed in the proper place, and then the ice was cut around the rock pile, then the rocks settled to the bottom. It took many repeats of the process to get the rock islands up to water level, then the rock crib was formed and the balance of the rocks were placed.

You will also undoubtedly share the river with canoeists and kayakers as this river has the best year-round whitewater paddling in all of New Hampshire.

If you visit the Thirteen Mile Woods area, you will also want to make a few sidetrips to see Lake Umbagog one of the most pristine lakes in New Hampshire. In fact you may decide that you want to make your trip a multi-day combination canoe and fishing trip. If so you have lots of choices.

Posted by Moosewood Communications at 6:26 AM