So Much Ice, So Little Time 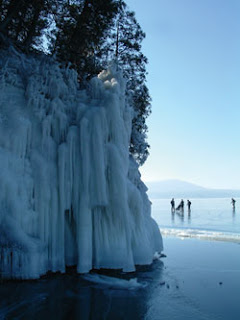 If you love to ski, you'll remember last winter as the winter with no snow. But some folks remember it as the winter of "So much ice, so little time!"

From Christmas week to late March, New Hampshire was an outdoor ice skater's paradise. There were way too many frozen lakes, and not enough winter days to

visit them all. However, those of us newly obsessed with the sport of "Nordic Skating" did find the time to cruise Lake Sunapee,Newfound, Big Squam, Little Squam, and others too numerous to mention.

What's Nordic Skating? It's cross-country ice skating across frozen lakes, rivers or canals. Nordic Skating originated in Sweden and Holland centuries ago, as an essential form of transportation for farmers trapped on their farms by roads that were impassable for much of the winter. With the advent of modern highways, Nordic Skating is no longer an essential tool for survival, but it's exploding in popularity as a recreational sport across northern Europe ... and across northern New England as well. 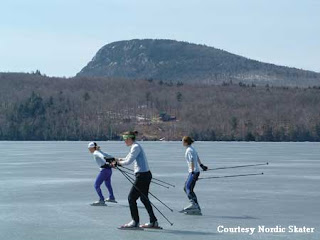 What sets Nordic Skating apart from ordinary ice skating? First, the setting. Nordic Skating can take you into a remote winter wilderness, surrounded by natural

splendor. Second, the equipment. Unlike hockey and figure skates -- which work best within minutes of the Zamboni exiting the rink -- Nordic Skates were designed for the rough, bumpy and even snow-covered ice of the hundred-mile-long lakes outside Stockholm.

Nordic Skating comes in two flavors: groomed trails and "wild skating". Groomed trails, like those on Little Squam Lake in Ashland and Lake Morey in Fairlee, Vermont are maintained by volunteers or by nonprofit groups like the Upper Valley Trails Alliance. There's free parking, free admission, and skaters of all ages are welcome. The Morey and Little Squam trails are the longest and second-longest groomed ice trails in the United States. How lucky we are! Except compared to Sweden, where groomed trails run as long as 50 miles from city to city.

Wild skating happens when weather conditions conspire to surface the lakes with miles of smooth black ice -- either in early winter right after freeze-up, or in midwinter after a thaw-freeze cycle. When black ice makes its appearance, the word goes out via the Nordic Skating email list. Groups of skaters converge on the biggest and best ice sheets. They break out their Scandinavian-made ice testing poles and begin probing the ice for thickness and strength. Then away they go.

Uneasy about doing your own ice testing? Then the best bet is to join one of the Wild Skating tours organized by Nordic Skater of Norwich, Vermont. There is no cost for the tours themselves, but participants who do not have Nordic Skates will need to rent them. The rental fee is $20 per day, and instruction is provided. For safety reasons, hockey and figure skates are not permitted on Wild Skating tours. (ed. note: You'll probably get into trouble and have to turn back early -- which is every tour leader's nightmare: Send the ill-equipped skater home alone? Or abort the tour and make everyone turn around?)

Wild Skating tours are organized on short notice, in response to changing weather and ice conditions. Meeting place and time are typically chosen 24 to 48 hours before the tour date, and are announced to the Nordic Skating email list. To join the list, email info@nordicskater.com.

Tour leader Jamie Hess has been skating on Nordic Skates for the past 8 years. Before that, he used to cross-country ice skate for miles in hockey skates. It was way too painful, and too much work! Compared to hockey and figure skates, Nordic Skates give you double the glide for the same amount of effort. Plus the boots are warmer, more comfortable, they support your ankles better, and they're way easier to put on and take off. In fact, you can put the boots on indoors and walk and drive in them. The blades clip on and off just like skis. So you never have to expose your fingers or toes to the cold winter air. Nordic Skates really put the fun back into skating for those of us who thought we'd never want to ice skate again!

A quick word about the boots, because they're "key". Cross-country ski boots designed for "skate-skiing" have been refined over the last 15 years to the point where they offer the perfect combination of warmth, support and light weight. A good pair of cross-country boots is your key to enjoying three different sports: skate-skiing, Nordic Skating, and off-season "roller skiing" on two-wheeled skis that roll down paved or dirt roads. Once you have the boots, you can acquire the skis, skates and rollers one at a time, or splurge and get the whole shebang all at once. 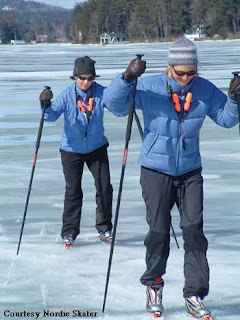 What's fun about Nordic Skating? For some, it's the speed. Nordic Skating can be as fast and efficient as riding a skinny-tire road bike. But for most of us, it's the ease of movement, the ease of learning the sport, and the ease of getting to a spectacular wilderness setting. . . and the freedom. Unlike a narrow road or hiking trail, skating down the middle of Newfound or Sunapee feels like soaring along a "flyway" two miles wide. You can glide with the wind, or bank and wheel and turn graceful circles hundreds of yards across. In fact, Nordic Skating may just be the closest sensation to flying that you'll ever experience.

Speaking of flying, some Nordic skaters bring along hand-held sails and kites. With the right wind conditions, skate-sailors can reach amazing speeds, and even become airborne. But that's another whole story.

New Hampshire has great lodging and restaurants throughout the state. Here are some of our recommendations in the places mentioned in this story:

Posted by Moosewood Communications at 1:40 PM