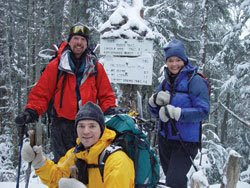 It was a weekend toward the end of November and the leaves that were so colorful a few weeks ago had all fallen by now.   The sky was slightly overcast and frost was evident but starting to melt.  As the temperatures rose into the 40s, I met my bother in law, his brother and his girlfriend.  We had decided to hike Mt Flume that day.

We drove up the Kancamagus highway and parked at the Lincoln Brook parking lot.  We gathered our gear together, and made sure we had enough food, water and warm clothing for the hike.  We set out along the Lincoln Woods trail, which follows an old railroad bed and runs along the east branch of the Pemigewasset.  It is a very scenic trail, and if you look carefully between the trees and up the river, you can make out some of the mountains of the Pemigewasset Wilderness in the distance.

After a short while the Osseo trail veers to the left and starts to make its way up the valley headed for Mt Flume.  The trail starts out easy but becomes increasingly harder as the trail gains elevation.  As the grade steepened, we all noticed an increase in exertion.  Although the temperatures started to drop as we climbed higher, the exercise kept us plenty warm.   There was very little wind at this point, and the hiking was very pleasurable.  With the decrease in temperature, the amount of snow on the ground increased.   The valley narrowed as we continued up. We were now fairly high up and turning around we could see that we had a good view of the valley.  But we also noticed how close we were to the clouds. Soon we would lose this view as we headed up in the clouds.  The wind was also starting to pick up, and the trees being smaller now, did not provide much protection.  The snow was starting to provide a slippery track.

As we got nearer the summit, the amount of snow was definitely slowing our progress.  We took turns breaking trail.  There were about 8 to 12 inches of snow, not enough for snowshoes, but enough to slow our progress.  We had brought one pair of snowshoes in order to break trail in case the snow became very deep.  This early in the season it did not seem likely that we would encounter deep snow. If it was later in the season, or we were going further, it would be prudent for everybody to have snowshoes.

The Osseo is the easier way up Mt Flume.  The Flume Slide trail is much steeper and very treacherous even during the summer, especially if it rains.  At this time of year, crampons and ropes would certainly be needed at a minimum.  For these reasons, we decided to go up the back side, which is less technical.

Once we broke above the trees we could really feel the wind.  The main wind current was from the west, but it still wrapped itself around the mountain and circled in from the north east.  The sweat we had built up from the climb instantly chilled us.  It was time for more layers.  But before long, we were back in the trees, and now starting to overheat!  Winter hiking can be very tricky to maintain a comfortable body temperature.  The south part of Flume has a flat shoulder, which we hiked across, before we finally reached the junction of Franconia Ridge trail. We had only 0.2 miles to go.

But a fairly dangerous short stretch, as it involved hiking along the narrow stretch of trail above the slide.  The way was clear of ice, and the wind was pushing away from the slide and into the trails.  If the wind had been blowing the other way, towards the slide, or if there was lot of ice, it might have proved more of a risk than what we were prepared for and we would have had to turn back.

The wind was blowing 30 to 50 miles per hour from the west, forcing us to crawl along the ridge.  At this point I had put on a face mask and goggles to protect my face and eyes.  I had to be very careful as the wind gusts were definitely pushing us around.  My pack made a good sail to catch the wind!  But with a little determination we pushed toward the summit, and soon reached it.  Once we reached the summit, we congratulated each other and took some time for some photos.  The conditions being as they were, we did not spend too much time at the top.  The clouds were thick and the views were limited.  We took a few minutes to appreciate where we were, and then we headed back. 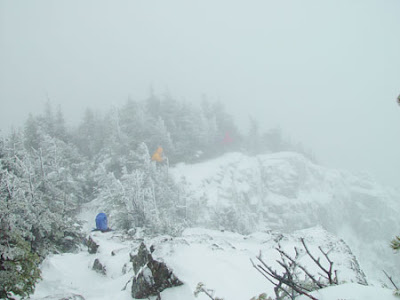 We had broken trail on the ascent, so the return was very easy as we made our way back down.  The snow that had so hampered our climb now made for a nice soft cushion as we descended.  Soon, we were back within the comfort of the trees.  The evergreens gave way to deciduous trees, and the wind diminished.  After a few hours we found ourselves back at the Lincoln Woods trail.  The roar of the nearby Pemigewasset accompanied us as we made our way back to the parking lot.  The 11 mile hike was strenuous and we were tired, but happy that we had accomplished our goal.

Posted by Moosewood Communications at 8:27 AM