By Way of the Connecticut River Scenic Byway 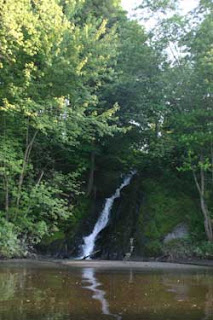 By Theresa Ludwick
Geography and Geology made the Connecticut River. History made the villages and towns that grew up along its rolling course. Like the river itself, a drive along the Connecticut River Scenic Byway will put you in a meandering mood as you leave the present (and its hassles) and enter a past filled with the quaintness of pristine farmlands and time-stands-still village
squares.
A River Runs Between Them

Starting near Canada, New England’s longest river forms a natural north-south border between the states of New Hampshire and Vermont for much of its 410 miles, before traveling through Massachusetts and its namesake state on its rendezvous with the Atlantic Ocean. The river’s vibrant life-force began drawing European settlers over 250 years ago to the rich soil that edged its banks, giving rise to an agricultural tradition that many of their descendants carry on to this day.

With the escalating growth of farming and animal husbandry – sheep wool became a major commodity early on – supporting industries sprouted to keep up with growing demands in and beyond the Connecticut River Valley. Textile mills and manufacturing companies ensured an ever-increasing economical stability. These stalwarts of commerce still stand in many of the river communities, though their functions have changed: museums, office buildings, malls, even restaurants, the architecture paying homage to an era in which the Connecticut River was an integral part. 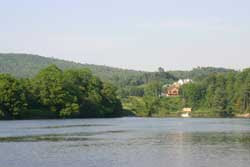 One of the outstanding features of the Connecticut River Byway communities is the historical covered bridges that span the river and its tributaries along its course. From Creamery Bridge in Brattleboro, Vermont, to Mechanic Street Bridge in Lancaster, New Hampshire, the artful combination of function and symmetry reflects the skill and devotion of their original architects.

The Current Of Time

With the advent of the steam engine, Connecticut River Valley technology leaped into the future. Railroad transportation replaced the relatively slower, more arduous river and road conveyance of both goods and people. This allowed for quicker transport of farm produce and raw materials, and the birth of a new industry that has not abated: tourism.
In support of this, the Connecticut River Byway Council was formed in1999 to promote the Connecticut River Valley’s rich historical, agricultural, and recreational resources. Combining a conglomerate of interests in both New Hampshire and Vermont, the Council strives also to maintain wise stewardship of resources and to cultivate support through education and various related initiatives and programs.

As a historical treasure trove, the Byway is indispensable, providing visitors to the valley with an abundance of insight into the culture of early Americana. Landmarks, buildings, architecture, and museums chronicle the fact that history happened here, and in a big way. Agricultural fairs have long been a binding force among the communities, and are still a source of pride and cultural significance where the past blends with the present, demonstrating the best of both.

So, it’s not just about the past! The present is filled with opportunities to sample a natural realm of rugged mountains, waterways, and forests that time and the valley’s unavoidable development could not alter. State parks abound. Camping, biking, hiking, kayaking, skiing: all manner of recreational possibilities invite year-round, and for pilgrims seeking spiritual refuge from the white-heat world, there’s no better sanctuary than the Connecticut Valley’s wilderness, where the Great North Woods enclose you like a mother’s warm and comforting womb. Numerous trails accommodate the quiet seeker and the challenge-seeking adventurer, including the venerable Appalachian Trail, which traverses the two states for a total of 311 miles. As well, the varied character of the river itself provides the opportunity for leisurely canoeing or fast and furious kayaking, and some of the region’s best fishing occurs along its moving mass.

The present also offers the treat of enjoying the bounty of the land as locals vend everything from homegrown maple syrup, honey, dairy products, and fruits and vegetables, to artistically and traditionally crafted wood and wool products. After biting into a crisp, freshly picked Cortland or Macintosh apple (Is your mouth watering yet?), you’ll never want another store bought imitation.

Flowing Toward the Future

The individual municipalities that make up the Connecticut River Byway community – villages like Bellows Falls in Vermont, or New Hampshire’s Colebrook – each contribute to the whole in their own unique ways. Take Bellows Falls: once a leader in the papermaking industry, and home to the country’s first canal, built in 1802. Colebrook, on the other hand, had the distinction of being the “potato capital” of the state, thanks to its fertile farm soil. Tucked into the northern, forested reaches of the state, its section of the river was the site of many a log drive (and jam) in the heyday of the New Hampshire logging industry.

Blessed by a prosperous past, the communities of the Byway press on toward the future, welcoming travelers like old friends. Indeed, some have come to visit, and stayed, captured and liberated at the same time by their small-town, homespun essence, their natural beauty, and their connection to the river. Like an umbilical cord that sustains and nourishes the child, the American Heritage-designated Connecticut River faithfully supported the early New England Byway communities as they grew and thrived. Though the people, the times, and the definition of progress have changed, the river still runs.

(For more information on the Connecticut River Scenic Byway, lodging, activities, and just about anything you want to know, visit www.ctrivertravel.net)

Posted by Moosewood Communications at 10:52 AM