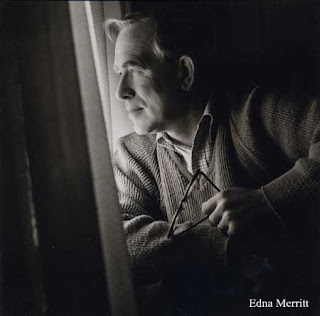 The halls of Riverwoods at Exeter, a beautiful retirement community in Exeter NH are covered with the art of some of New Hampshire’s 20thCentury art icons, among them John Hatch and Mary Taylor - providing me with a pleasant diversion as I wait in the lobby for Richard Merritt. I pause for a moment before a large oil painting by Hatch of the Franconia Ridge.

“Look at the person on the bottom right, “ I hear a quiet and familiar voice say. “He appears to be looking to the right into the distance. But take four steps to your own right and tell me what you see.” I step right and reply: “He is gazing directly up the mountain!”

I turn then and see the bright shining eyes of Richard Merritt smiling as he, once again, helps me to see deeper into the image that lies before me.

Nearly thirty years have passed since the days at UNH when my friends Ed Acker, Steve Bliss, Casey McNamara, Hannah Stutz, among others, would gather around a small table, specially lighted, to critique one anothers work as Richard Merritt looked on.

Back then, like Akela, the lone wolf of Kipling’s iconic Jungle Book, he seemed to say “Look Well Oh Wolves!” as he urged us - the eager, hungry members of his pack - to describe, each in our own turn, how and why we created the image we had placed before the class. He was gentle and soft-spoken, probing for justification and response. He knew what he thought, but it mattered little at the moment. He was a teacher in the purest sense. His task that day and everyday was to help us find our inner voice through the medium of photography. He wanted each of us to demonstrate what we had learned, how we had grown.

Richard “Dick” Merritt was born in Pougkeepsie, NY in 1921. His lifelong passion for photography was born in the depths of the Great Depression as he struggled to find meaning and hope amid the deprivations of that time. Dick took up photography with some help from his uncle and created a small darkroom of his own in a closet of his home. He also joined the Pougkeepsie Camera Club and began to develop his skills. He dreamed of attending the Clarence White School of Photography in New York. However, with his father out of work and the family struggling, college was out of the question at the time, though he would manage to find his way back, after a three year stint with Uncle Sam aboard the U.S.S. Wake Island during World War II, this time at the prestigious Rochester Institute of Technology.

In 1942 he met his wife Edna on a blind date and began a love affair that has lasted 60 years. Edna, a talented photographer in her own right, is the yin to his yang and serves as both his most ardent supporter as well as his toughest critic. They were married in 1945.

In 1948, while he was living at the YMCA in New York City and working as a dye transfer technician Merritt received a telegram from the University of New Hampshire offering him a job as UNH Photographer and art teacher. He served in this dual capacity for 22 years. As the UNH photographer he photographed everything from football to academia and regularly rubbed shoulders with many of the Nation's art, cultural and political icons. Lotte Jacobi, May Sarton, JFK, Edmund Teller, Margaret Mead, Aaron Copeland and the usual assortment of political leaders that make New Hampshire part time home during the presidential primary season were only a few of the many people Merritt would meet and photograph during those years.

In the 1950s, he was the sparkplug behind the formation, and the first president of, the University Photographer’s Association, now a national organization. He was also pushing hard for the acceptance of photography as an art form within the broader arts community.

At the same time he was developing his own eye and style as well as pushing the envelope within his profession. Merritt has never really lived by the conventions within his field. He is a rebel in the purest form. While others were photographing landscapes or people, Merritt was capturing emotions through seemingly random objects photographed and displayed in their stark singularity or manipulated in some way to add depth, humor or passion to their meaning. Not all of these images evoked accolades but they did invariably elicit a response. Dick laughingly recalls the moment when one of his prints won a prize at a NH Art Association exhibit . . . “Lotte Jacobi came up to me and said: Dick, you’ve gone too far this time!" 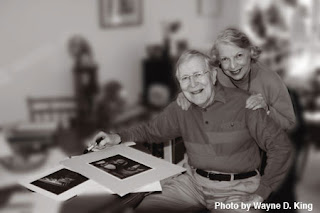 While there are many things that make Richard Merritt unique, perhaps one of the most unusual and unorthodox aspects of his lifetime of achievement is that he has NEVER sold an image. He has had work in the Kodak exhibit at the 1948 World’s Fair - a mural; had an image chosen for the coveted “Parting Shots” in Life Magazine; displayed his art at Grand Central Station in a Kodak sponsored “Creative Color Photography” exhibit; and, had a one man show at the Pennsylvania Academy of Fine Arts among many others and yet never has he allowed anyone to buy one of his images. For him, each image is like a child, born of his imagination and talent - not something with which he is willing to part. It is the purist in Merritt. Yet his images themselves are anything but pure . . . ranging from whimsy and self-parody to dark and foreboding, often manipulated or even mutilated to reach his objective. Though Merritt himself would probably say that his objective is never truly reached and any of his images might show up in another form at some future date.

In 1970 Richard Merritt gave up the job as UNH Photographer to concentrate on teaching as assistant professor of photography at UNH. It is here that perhaps, his most profound impact has been made. Students would literally sleep in line at the Paul Creative Arts Center in order to register for a coveted slot in one of Merritt’s classes. During the 1970s and 1980s Richard Merritt brought the photography program at UNH to acclaim, both in terms of the quality of the program and the intense loyalty of the students he nurtured with his quiet manner and quick smile. In 1986 he retired from this position.

Today, Merritt and his love Edna, live a life of quiet contentment at Riverwoods at Exeter where they are fully engaged in the varied and interesting programming that Riverwoods offers. “The folks who live here”, says Edna “have their own committees that create the programming so there is always something going on to challenge our minds and bodies, it’s a very full and interesting life.” Dick has not only shared his photographic talents with fellow residents but he has taken up painting, renewed his acquaintance with the piano and continues to enjoy jazz and the music forms that influence his creative photographic process. He’s even working with the folks who run Riverwoods to help set up a darkroom as well. For Richard and Edna Merritt it is a retirement befitting a life well lived, filled with friends, frenetic opportunity and art . . . lots and lots of art.

Richard Merritt, 90, a resident of the River Woods Retirement Community of Exeter since 1998, died Jan. 8, 2012, after a short illness. The gift he gave to so many of us for whom photography helped us discover our inner voices will live on.

Richard Merritt’s long reach has inspired many photographers over the years. Two Merritt students who we managed to catch up with have made their own mark in the photographic world.

Edward Acker was born and raised in New York and now makes his home in the Berkshires and in New Hampshire. When he was just seven years old, his father gave him his first Leica camera, and from that time on, photography has been his life’s passion. Known primarily for his soulful and stunning black & white photographs of families and children, he is also well known for his unique, docu-style wedding photography. He has also made a name for himself photographing such luminaries as James Taylor, Madonna, professional golfers like Arnold Palmer and Tiger Woods, and in 2000, he was the only photographer invited to photograph the birthday party of President Bill Clinton on Martha’s Vineyard.

When you see a family photograph or a child’s portrait done by Edward Acker, you know it right away. He captures the subtleties of family like no one else. Each member’s soul shines through... there’s nothing stiff or formal about it. He reaches out to a family in their home setting and discovers and captures who they with sensitivity and care.

An accomplished golfer himself, Edward Acker has been following the pros for many years. He’s gotten shots you won’t see anywhere else, such as Gene Sarazen wearing a three-piece suit while standing atop a giant boulder in New Hampshire, Tiger Woods with inner city children – the beneficiaries of from his charitable foundation. He’s also gotten great shots of Gary Player, as well as some very rarely seen shots of Payne Stewart posing in his inimitable golf attire. But the player he admires the most, and the one he’s spent the most time photographing, is Arnold Palmer. “From the first time that I met him, he’s always reminded me a lot of my father,” says Acker. “He’s kind, generous, one of the best people I’ve ever known. I consider myself extremely fortunate to know him.”

Edward lives with his wife, Kris, who is a painter, and their very pampered cat, Thomas.

Casey MacNamara has been shooting commercially since getting out of college, although he did some UNH yearbook senior portraits where the subjects traded a homemade dinner for the work. “Early on,” says McNamara, “I shot anything for anyone: family portraits, pets (even a dead one) and weddings. While all that dreadful (based on the results) work was going on, I was shooting my personal work, trying to make the great American image. I was also bartending, working construction, driving a cab to make a living. At one point, I worked for a photo studio in California that booked three weddings a day on the weekends. Shooting six weddings every weekend left a deep psychic scar and put the fire in my belly to find work that was better.

I've had a studio in Boston for over twenty years, shooting that 'better' work. I've photographed million-dollar necklaces, NBA coaches and variety of other pretty cool projects. Being flown to Florida or California in January for work is it's own reward - being paid well on top of that would make anyone feel pretty good. But recently I shot images for a meat nutrition guidebook. Everyday for a week, a truck would drop off a few hundred pounds of the nicest looking meat. I have a fridge at my studio, but it's not big enough to handle it all, and with the meat under studio lights all day, it got pretty funky. By the end of the week, I was close to being a vegetarian. But like shooting weddings back in the early days, the meat job paid for a couple months of studio rent and part of the motivation to set up the photograph Spring Snow. Maybe it's the great American image or maybe not, but to paraphrase Robert Frank, one of my early photographic heroes: How else can you explain your effort and your failure 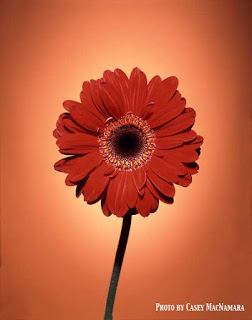 Posted by Moosewood Communications at 3:12 PM