Bud Thompson: "Finding a Place in the Circle" 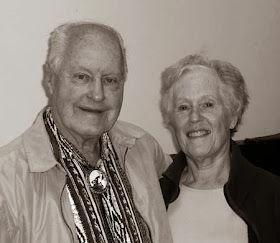 When Charles "Bud" Thompson was 7 years old, a Paucatuck Chief urged him to find his talent and use it. Now 84, Bud has found and used many talents. Yet the founder of the Canterbury Shaker Museum and the Mt. Kearsarge Indian Museum in Warner shies from limelight. After all, he's just doing his part: making the world a little better, finding his place in the Circle.

A Place in the Circle
A native of Newport, RI, Bud recalls that life-changing day in second grade. "Our teacher told us we were going to have a visitor. Then in walked a huge, handsome Indian. Our eyes popped out of our heads, but he wasn't threatening." Sachem Silver Star invited the children to sit on the floor in a circle, the Native American's most sacred symbol, "because when you take your place in the circle, you belong." Eyes twinkling, Bud continues. "Silver Star told us that when you're born, you're given a special gift, a talent. When you find it, use it."
That evening, little Bud described the encounter to his family, including his older sister who had nicked named him. "She said 'Write him a letter and tell him how great he is. Tell him you hope he'll read about you someday.' So I did and my sister corrected my spelling." Silver Star duly responded, enclosing a photo of himself and thanking Bud. "He said he was already proud of me for writing the letter."
That summer, young Bud visited his grandparents on their farm in Connecticut, where he enjoyed working alongside his grandpa in the garden. "It was a scorcher of a day," Bud recalls. "I was drinking cold water under a maple tree when I saw a little stone. Grandpa told me it was an Indian arrowhead, probably a spear point or a knife blade. Grandpa told me it was like a voice out of the past telling me someone had once lived here." The discovery had a profound effect on the small boy who began to collect more artifacts from Grandpa -- Algonquin, Pequod and Mohegan -- even as he discovered his own talents.

Musical Gifts
By age 16, Bud performed as a "singing cowboy" on WMEX in Boston. He chuckles. "My sister typed official looking-letters so we could get free booklets about cowboys like Wild Bill Hickock. Then I'd tie in a song with the cowboy stories." The show helped to launch his country music duo, Babs and Bud, which toured the United States. Darryl Thompson of Gilmanton describes his dad's musical career as "opry to opera," because Bud studied voice with Alexander Kipnis of the Metropolitan.
When Bud lamented the lack of original folk songs for his repertoire, someone suggested that he investigate songs of American Utopias. Again, the twinkle. "Utopia? How do you spell it?" The simple suggestion, however, resonated with his philosophy of life: "Read, read, read -- then try it." While researching groups that tried to find "heaven on earth," he found the Canterbury, NH, Shaker Village, and perhaps, his own piece of paradise.
Founded in 1792 by the Shakers, a deeply spiritual group espousing communal living, pacifism and a simple lifestyle, the Canterbury community had peaked in the 1840s. By the time Bud arrived, the once-vigorous Shaker enterprises -- agriculture, furniture making, handcrafts,-- had sorely declined. The few surviving Sisters struggled to hang on, giving tours of their home and selling items amassed over 160 years. The treasure trove included thousands of Shaker hymns, many written at Canterbury.

Shaker Village Years
Bud remembers, "In the 1950s I took a tour [at the Shaker Village] and bought a hymnal in the antique shop. When Sister Lillian Phelps saw my hymnal, she asked, 'Would you like to sing some duets?'" The friendship would endure for decades.
"We corresponded, and the family and I were invited for Thanksgiving and Christmas celebrations." The family by this time included Bud's wife Harriett; and one son Darryl.
Darryl, now a Shaker historian, explains: "The last Shaker brother had died in 1939. Since it was hard for the sisters to climb stairs, they wanted to close the tours. They had already advertised their season, so they asked Dad to do the tours." Already Bud had become a collector of Shaker artifacts, buying them as the declining village sold them. He added his own pieces to his entertaining Meeting House lecture, the better to educate his rapt audiences.
By 1959, Bud's folk singing tours, sometimes 13 concerts a week, had taken their toll. "I had worked all summer for the Shaker Village, dreading a tour of Wisconsin and Minnesota in the fall. When the sisters asked me if I'd consider staying, I stayed." For the next 32 years the Thompson’s called East House home. "We never worked for more beautiful people. They represented what Christianity should be."
Darryl says, "Dad's title was 'curator,' but it's hard to give a title to what he did because he did everything."

Preserving Shaker Legacy
Perhaps the most important thing Bud did was to persuade the last Shaker women that their property did not have to be sold. "I loved it and knew it had to be saved, but the Eldress wanted to phase it out." When Bud suggested that the entire Village become a museum, the Eldresses were tentative, skeptical, cautious and a bit bewildered. According to Darryl “A historical restoration was outside of their frame of cultural reference. To them, a museum was a building. They could not conceive of an entire community as a museum. To them, a museum had four walls.”

"So I took them to Sturbridge Village and the Shelburne Museum" said Bud, places he took his own children to see living history. Three of the surviving Shaker sisters: Eldress Bertha Lindsay, Sister Lillian Phelps, and Eldress Marguerite Frost participated in these visits and were convinced. They became the core of support needed to gaining the support of the remaining sisters.

When a feasibility study also suggested that the Shaker Village, a group of 20-plus original buildings, could become a "living" museum, the Eldresses agreed and attorney Richard Morse, a member of a Manchester law firm, set up the legal corporation.

During his years at the Shaker Village, Bud worked as the historical director and remains an honorary trustee. Nancy worked as a tour guide, then as director of education. These experiences would serve them well as they pursued "retirement" and a dream deferred -- their own museum.

Completing the Circle
Inspired by Silver Star, Bud had continued to collect Native American artifacts all his life: baskets, beadwork, clothing, tools, weapons. Now it was time to share them. Bud sold property, which had been in his family for four generations, to buy a horse farm in Warner, NH. Situated atop a hill near Mt. Kearsarge, the 12-acre spread had both a house for the couple -- and an enclosed riding arena for their museum, which would open in 1991. Bud insists that the venture would not have happened without the partnership of his wife Nancy. "I have a lot of wild ideas. She's the filter system that makes them practical. I'm just a lucky guy surrounded by people more intelligent than I am who helped me."
Darryl had always wanted to contact Silver Star to surprise his father and to let the Chief know what an impression he had made. The research savvy historian, to Bud’s "utter amazement," connected with a grandson of Silver Star in Rhode Island. Though the Chief had passed away, Bud and Nancy honored 32 members of Silver Star's family on opening day of Mt. Kearsarge Indian Museum -- a circle completed.
The circle also figures prominently in the floor plan of the 8,500 sq. foot museum, both for symbolism and, as Nancy says, "surprise." Guests can see only a few regional galleries at one time.
Museum Director Krista Katz says, "They [the galleries] take you on a journey of the United States, in which New England Woodland Tribes form the most significant focus." The thousand "stellar artifacts" include a 3-4 foot Apache olla, a Nez Pierce cradle board, a Chippewa/Ojibway adolescent boy's ceremonial outfit and Southwestern pottery 7,000-12,000 years old.
Katz marvels, "The thing that amazes me is that an ordinary man -- not a man of wealth and privilege -- has the perseverance and dedication to share with the public in this way."
Significantly, the museum has little signage. Bud explains, "I wanted a museum with a voice. Let the tour guides flesh out the artifacts. Just show what they [the Native Americans] loved. Touch the heart. Touch the people."
Artifacts are just the beginning. Bud worked for four years at the Arnold Arboretum, Harvard University's Botanical Gardens, so plants play a prominent role in the setting. The museum's acreage includes a Medicine Walk through nearby pine woods where signs identify plants used by Native Americans. Heritage corn grows in a nearby garden. A tipi and sweat lodge on a grassy hilltop command a view of Mt. Kearsarge. Bud says, "I wanted to make a tranquility zone where people can find peace, not just a mausoleum of artifacts. We want this to go on long after we're here." In addition to pow wows and festivals, the ever-growing Museum offers educational camps and workshops. Last year alone, 6,500 school children visited the Museum. "Without the help of my wife, Krista, the staff and volunteers, none of this could happen," Bud maintains. "we're all connected."
These days Bud says he's "fishing" for a new project. Coming from a family with longevity genes-- one aunt lived to 105 -- he's not done yet. The octogenarian idealist still tells stories, mows lawn, lugs rocks and plants trees. "Life isn't worth anything unless you leave it better than you found it," he says -- unless you find your place in The Circle.

Ed's note: This article was produced for Heart of New Hampshire Magazine and HeartofNH.com and transferred to this website to assure that the stories and articles written for the magazine would never be lost to the public.


Moosewood Communications at 9:29 AM