The Willeys and the Willey House

The Willeys and the Willey House
Ben George

When my family moved to Bartlett, NH from Oregon in 1946, I had to learn some new words and phrases – in addition to deciphering New England accents. One phrase was "that gives me the willies". I eventually understood from my young friends that the meaning of "the willies" could range from "creepy feeling" to "really scary feeling". Regardless of the intensity of the feeling, it carried a sense of foreboding and suspense.

Samuel Willey Jr. and Polly Lovejoy grew up in Conway, where their parents were early settlers of the town. He was born in 1788, she in 1791. They married in 1812 and purchased a farm in Lower Bartlett on the West Side Road near Humphrey Ledge. (The property is currently referred to as the Lady Blanche House.) After thirteen years on the farm and five children, they decided to try the inn-keeping business in Crawford Notch. They bought the Notch House, located 2 miles below the Notch Gate. The road through the Notch was opened around 1785 then upgraded to a turnpike (toll road) in 1804 by investors in Portland, ME.

The Notch House, built in 1793, became The Willey House Inn and Tavern in October 1825. That gave Notch travelers a choice of three inns. Able Crawford's Mount Crawford House was 6 miles south of the Willey House and Ethan Crawford's inn was located 8 miles north of the Willey House. The Willey House was a two story house, which Samuel enlarged, with stables and a barn. A traveler described the Notch in 1793 as follows – "The Notch of the White Mountains …is a very narrow defile extending two miles in length between two huge cliffs, apparently rent asunder by some vast convulsion of nature. The entrance to the chasm (from the north) is formed by two huge rocks standing perpendicular twenty two feet apart." The Willey House sat on a meadow, at the foot of one of the "huge cliffs" (later named Mt. Willey), on the west side of the Saco River where the Notch opens to a narrow valley. At that time, the valley was full of sugar maples which provided beautiful fall color and maple syrup.

Farmers from northern New Hampshire and Vermont passed the Willey House on the way to Portland Maine, sometimes as many as 75 horse drawn pungs in caravan. However, these were not the potential customers that the Willeys wanted to shelter and feed. They wanted tourists from Boston, New York and other cities, who were seduced by the artists of the Hudson River School and the travel stories of Emerson, Thoreau, Hawthorne and James. They wished for tourists who came to see the pristine, natural beauty of the White Mountains.

In the summer of 1826, the White Mountains suffered a severe drought. Thin mountain soils dried deep to powder and gravel. As the sun was disappearing over Mt. Webster on the evening of August 27, dry leaves began to rustle and the Willey's wheat field chattered. A stiff, cool breeze replaced the heat and humidity of the day. By midnight, the breeze had become an unusual gale force wind, shrieking through the Notch announcing the coming of a storm. By 4:00 AM Monday morning August 28, a steady, heavy rain was heard on the roof of the Willey House which continued all day, climaxing at 11:00 PM with a tremendous cloudburst. Soon after, mountain sides began to rumble and move. By midnight, clouds were replaced by stars in the clear sky, but the rumble of slides and the trembling of the land continued. 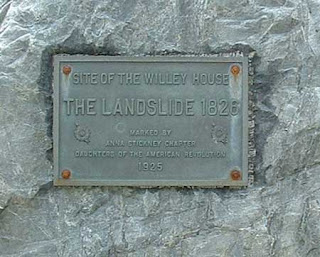 The next morning, Ethan Crawford, looking south from Mt. Willard, saw that the Saco River had become a lake of some 200 acres. He later wrote that his father's farm and sawmill, 6 miles below the Willey House, was largely destroyed by the flood. Able Crawford lost 28 sheep, his grain harvest was swept away and a twenty two inch high water mark was left on the Mt. Crawford House. Indeed, many bridges from Crawford Notch to Conway were swept away and many farms were flooded. In the Notch, slides destroyed much of the turnpike and changed the course of the river. Deep gouges and bare rock face adorned the mountainsides, where trees, soil and stone had been stripped away. A merchant named Barker traveled the next day through the Notch to the Willey House. It took him all day to go over and around 6 miles of rubble. He found the Willey House still standing and dry, but deserted. After spending Tuesday night there, he proceeded to Bartlett Wednesday morning and passed along the mysterious news about the Willey family and the general devastation of the Notch land.

A search party was organized in Bartlett, and reached the Willey House Thursday morning, August 31. They also found the house deserted, but Edward Melcher, a member of the party, wrote, "The track of the slide reached to within three feet of the house and carried away one corner of the barn". Amazingly, the house had survived because a large granite outcropping above the house had temporarily divided the slide into two streams, which reunited below the house. A big, partially submerged, rock near the corner of the house blocked the descent of a spruce tree at the front of the slide causing debris to pile up to the roof of the house. The barn wreckage killed two horses and trapped a yoke of oxen. Several sheep and cows had made their way to a small open space in front of the house, which faced the rubble strewn valley floor. The party claimed that the length of the slide was nearly 3 miles to the top of the mountain. Trees, roots, stone and gravel covered their small wheat field, just north of the Willey House.

Thomas Hart and Stephen Willey (Samuel's brother) found Mrs. Willey and David Allen, one of two hired men from Bartlett, by digging into the debris above the house. Their bodies were terribly mangled and battered, lying under shattered trees and stones. Later that day, Samuel's body was found submerged in the river and pinned down by a barn beam. On Sunday, Eliza, age 13 and Sally, three years old, were found. Eliza was under water, with no bruises, presumably drowned. Sally was underneath three feet of rubble below the house, but above the river. The other hired man, David Nickerson, age 21, was finally found on Tuesday. Three Willey children, Jeremiah, eleven; Martha, ten; and Elbridge, seven – were never found.

David Allen was buried in the Bartlett cemetery with a rough stone marker inscribed – "D. Allen Killed at Willey Slide 1826". The Willeys were buried in the family cemetery in North Conway, with a single gravestone listing all names and ages of family members. The inscription reads: "To the memory of the family which was at once destroyed by a slide from the White Mountains on the night of 28 August, 1826". However, their public memorial was the undamaged Willey House. Although it changed ownership several times, the Willey House continued to serve tourists. Writers of the era wrote poetry and stories imagining the creepy, agitated, frantic feelings of the Willeys as they listened to the mountain slide coming to them, dramatizing their nightmarish tragedy. Some wrote of the beauty of nature becoming a deadly force, some wrote romantic fictional stories of the aftermath.

The Willey House was one of the most popular attractions in the White Mountains until 1899. That year, after withstanding wind, rain and mountain slides, tragedy finally captured the 106 year old Willey House, when it was consumed by fire.


Posted by Moosewood Communications at 7:09 PM